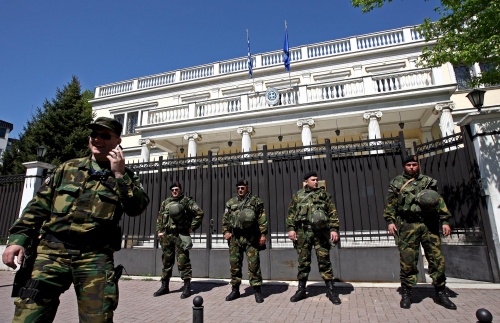 A cordon of special police forces stands in guard in front of Greek Liason Office during the press conference of united NGO's, held as a protest against Greek policy objecting Macedonian constitutional name, Skopje, 07 April 2008. Photo by EPA/BGNES

The Prime Ministers of Macedonia and Greece are reported to have 10 days in order to resolve the name dispute between the two countries.

According to Macedonian TV channel A1, which cites diplomatic sources, the EU is expecting that Gruevski and Papandreu will resolve the dispute in the coming days so that on December 7 Macedonia could receive a date for starting its EU accession negotiations.

On Friday, November 20, the Macedonian government confirmed it was ready to hold a direct meeting with the Greek side.

If Macedonia manages to resolve the name dispute with Greece, the authorities in Skopje hope that the country will start EU accession negotiations in April 2010.

Macedonian Prime Minister Nikola Gruevski is supposed to tell EC President Jose Manuel Barroso how his country will be called during their meeting on December 2, 2009.

The Macedonian name dispute has been holding back Macedonia in international dealings as the name “Republic of Macedonia” is opposed by Greece because a northern Greek administrative district is also called “Macedonia”.