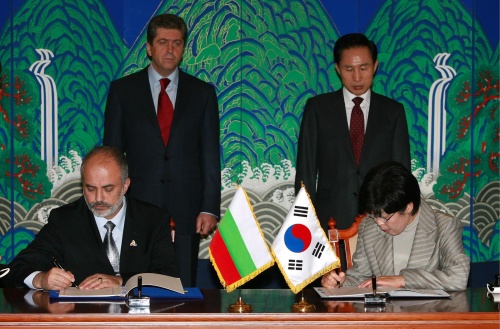 South Korean centers for training and qualification of workers will be opened in Bulgaria in 2010, according to Labor Minister, Totyu Mladenov.

In Mladenov’s words, the training centers will be located at the plants owned by South Korean investors.

The Labor Minister announced in Sevlievo Thursday that “serious” South Korean investments were expected in Bulgaria starting 2010, and that the Bulgarian state would do its best to provide Korean businesses with a sufficiently qualified labor force.

The South Korean investors are said to be interested in hi-tech operations in Bulgaria. Their investments in production operations will go hand in hand with the respective training centers.

According to Mladenov, the Bulgarian state has achieved similar agreements for investment and qualification centers with businesses from Israel and China.

Mladenov’s announcement about the expected South Korean investments comes after he visited South Korea at the end of October 2009 as part of a government delegation led by President Georgi Parvanov.

Parvanov himself has invited the Korean giant Hyundai to set up a joint venture with Bulgarian companies for the production of tankers for compressed natural gas. This idea had its follow-up in a deal between Bulgaria and Azerbaijan sealed in Sofia last week during the visit of Azerbaijan’s President, Ilham Aliyev, which includes the setting up of a joint venture for natural gas transfer including through tankers for compressed gas.