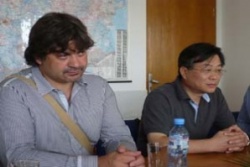 The owner of Via Properties Denis Barekov (left) and the Vice President of the Luoyang Glass Company Li Wei announce their intention to invest in the old glass factory in Razgrad, April 2008. Photo by Darik Shumen

After a visit in April 2008, representatives of the Chinese holding visited Bulgaria for the second time, and met Thursday with Finance Minister Simeon Djankov, and Todor Dimitrov who is a MP from the Razgrad District. They are to visit Razgrad on Friday.

In April 2008, the Vice President of CLFG, Li Wei, announced the Chinese holding was going to invest at least EUR 80 M in the former “Diamond” factory in Razgrad, which was shut down in 2000 over financial troubles.

In 2007, its assets were bought by the Plovdiv-based firm Via Properties, with which the Chinese company is planning the investment.

CLGF is a state-owned company, and ranks third largest in the world in production of flat glass. The plant in Razgrad is expected to employ 300 wokers.