Bulgaria MPs with No Recollection of Shady Businessman 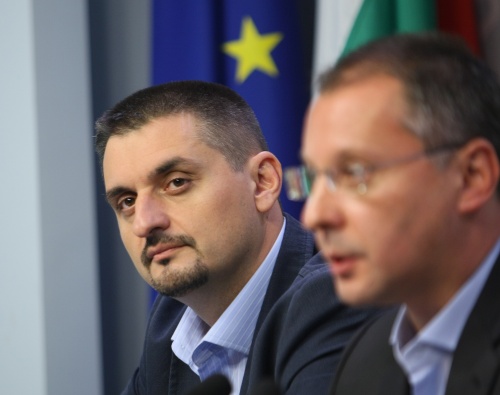 Socialist Party MP Kiril Dobrev (left) is one of the four deputies exposed to have connections with Krasio the Black. Photo by BGNES

Two of the four Bulgarian Members of Parliament who were exposed to have been in contact with notorious ‘businessmen’ Krasimir Georgiev, has denied knowing him.

“I state with full responsibility that I have no recollection of establishing contacts with the person Krasimir Georgiev,” declares Lyutvi Mestan, Deputy Chair of the ethnic Turkish party Movement for Rights and Freedoms (DPS) in a letter to Chief Prosecutor Boris Velchev, in which he demands that he be presented all available data about his alleged connections with Krasio.

Mestan and two other DPS MPs – Kasim Dal and Erdoan Ahmedov – were revealed Wednesday by Yane Yanev, Chair of the Parliamentary Anti-Corruption Committee, to have been had phone conversations and exchanged SMS Text messages with Georgiev, aka ‘Krasio the Black’, in 2008 and 2009. The information came from Krasio’s mobile phone address book, which contains 1 040 numbers.

The fourth MPs exposed to have had dealings with Krasio is Kiril Dobrev from the Bulgarian Socialist Party. Dobrev denied that he ever knew Georgiev.

“Lyutvi Mestan and Kiril Dobrev may be denying that they know Krasio the Black but according to the presented official data intelligence devices had been used on them legally showing that there were calls and SMS texting between him and the MPs,” said Iskra Fidosova, Deputy Chair of the Parliamentary Group of the ruling GERB party.

In her words, those MPs will have to give explanations before the prosecutors and the courts about their connections with Krasio.

The Krasio affair started after in October it became clear that ‘Krasio’ was a ‘piggy bank’ who is alleged tot have offered magistrates to secure their appointment to high ranking positions through the vote of the Supreme Judicial Council in exchange for EUR 200 000 in cash.