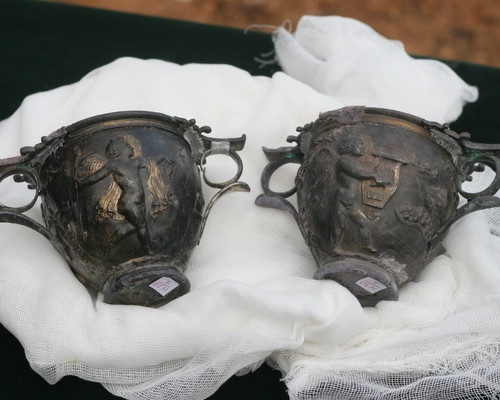 The two silver cups with gold coating featuring images of the ancient god Eros are among the most precious finds from the Karanovo tomb. Photo by BGNES

A team of Bulgarian archaeologists led by Veselin Ignatov formally presented Tuesday their finds from the tomb of an aristocrat from Ancient Thrace near the southern town of Nova Zagora.

In October and November 2009, Ignatov’s team found a burial tomb of dated back to the end of 1st century and beginning of 2nd century AD, located outside of the village of Karanovo, in southern Bulgaria.

The finds at the lavish Thracian tomb include gold rings, silver cups and vessels coated with gold and clay vessels. Those include two silver cups with images of love god Eros, and a number of other ornate silver and bronze vessels.

According to Ignatov, the finds are sufficiently varying and rich to be used for the forming of a small museum dedicated to provincial Roman-era art. The aristocrat belonged to a rich family descended from the ruling strata in the Odrysian Kingdom (5-3rd century BC).

The previously unknown tomb was discovered after in 2008 the archaeologists started to research area damaged by treasure hunters, and found a Thracian chariot at a nearby spot.

The archaeologists from the Nova Zagora History Museum are going to continue their exploration of the Thracian tomb on the spot even during the coming winter months after a special shelter is built on the site.

Ignatov said a total of six two-wheel and four-wheel chariots have been discovered in the region, and that he had the idea of creating a center for the study of ancient chariots in Nova Zagora.