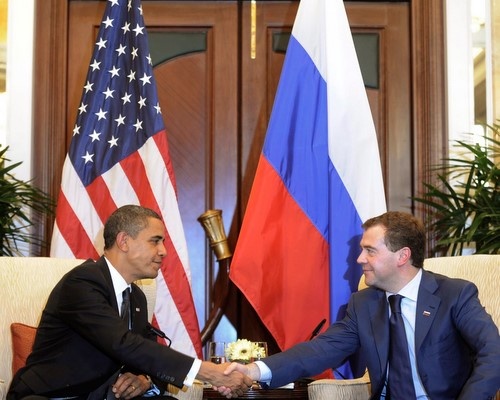 US President Barack Obama, with Russian President Dmitriy Medvedev, delivers remarks during a bilateral meeting at the APEC summit in Singapore, 15 November 2009.

Presidents of the United States and Russia, Barack Obama and Dmitry Medvedev, have confirmed their intention to have a new START Treaty in place by the end of the year.

Obama and Medvedev met during the summit of the Asia-Pacific Economic Cooperation in Singapore Sunday.

Both leaders have committed to a replacement START nuclear arms reduction treaty as the one currently in force expires on December 5, 2009, VOA reported.

The Iranian Nuclear Program was the other major Obama-Medvedev meeting during the Singapore APEC Summit.

Obama has stated that diplomacy was running out of opportunities to restrict Iran’s attempts to build a nuclear bomb, while Medvedev has threatened Iran with new sanctions should the nuclear program talks fail.

The Russian President said he hoped to convince Iran to send its enriched uranium to Russia, where it could be further processed to fuel an aging reactor in Tehran.