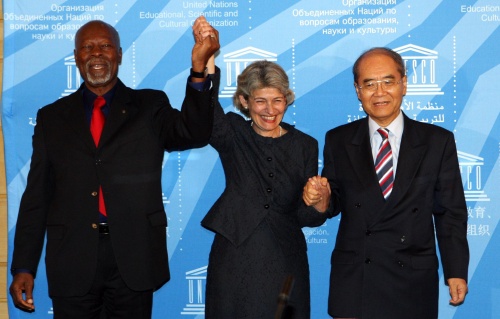 Bokova was elected Director-General of UNESCO in September 2009 after a tough battle in five rounds at the UNESCO Executive Council. In the final round, Bokova won against the Egyptian Culture Minister Faruq Hosni with 31 vs. 27 votes. She has thus become the highest ranking Bulgarian in an international organization of all time.

Irina Bokova is the first woman and the first representative of Eastern Europe to ever chair UNESCO.

Your election for Director-General of UNESCO is a huge success for Bulgaria. How would you describe its dimensions in greater depth? How does Bulgaria benefit from it?

I think that through my election as the new UNESCO Director-General Bulgaria has gained a lot of prestige. Bulgaria has become known with a piece of good news. From the very beginning of my campaign, with regard to the election, of course, but not only, I have thanked Bulgaria for the support that I have received.

I have been backed by three Prime Ministers, the President, the whole diplomatic corps, university and intellectual circles, and many others. From the very beginning I thought that this was very good for Bulgaria because Bulgaria needs successes. We really do need more confidence, greater trust in our own forces, and good news.

But I think that Bulgaria has gained more than just prestige. I believe that the position of Director-General of UNESCO brings enormous influence. UNESCO is one of the major organizations within the structure of the UN. This gives Bulgaria many opportunities through the election of a Bulgarian to such an important post.

One should keep in mind that the Director-General of UNESCO does not just govern an annual budget of USD 1 B, and is not just in charge of a staff of 2 500 in dozens of regional bureaus around the world. The UNESCO Director-General is one of the heads of the largest UN agencies who meet several times a year under the chairmanship of UN Secretary-General Ban Ki-moon, and practically decide on the policies of the UN.

Of course, I should mention as Bulgaria’s benefit from my election everything which has to do with increased visibility, establishing contacts, opportunities for greater international influence.

A large number of international media commented that Bulgaria entered the UNESCO Chief race as an outsider, and that the election of its candidate had been the result of a lucky concurrence of circumstances of a sort, largely thanks to the negative vote against the Egyptian candidate Faruq Hosni. To what extent are such claims unfounded? What do you attribute your, i.e. Bulgaria’s success to? Why is Bulgaria – in your person – the most suitable country to chair UNESCO?

You know, when a French journalist asked me right after I was elected between which two rounds I found out that I might get to win those elections, my reply was, “I found out a year ago…”

I have never felt as an outsider, I always felt that I had great chances of winning. If it wasn’t like that, I would not even have run in the first place, because there would be no point in investing so much time, funds, and efforts on part of the Bulgarian state just so I can run in some competition. I have always believed that I have fair chances of winning for several reasons.

From this point of view our participation here at UNESCO, and not just here – in the UN as a whole, and in other international organizations – is unique, and we should have more self-confidence. The UNESCO Elections proved that too, because this is how the others viewed us, and as the Bulgarian candidate I can say that the amount of work that we did was enormous.

According to the common opinion, our campaign was the best, the most in-depth one, the most relaxed, open, and transparent one.

All my events and meetings were immediately covered on my website. I visited 47 countries, eight regional bureaus, I was at the World Bank, I had contacts with many ministers, with many different circles. I think that all this, and especially the relaxed and open attitude towards all other candidates produced these specific results.

How would you comment on the reactions in the Arab world that saw your election as the UNESCO Chief as an epitome of the “clash of civilizations” in which the West, manipulated by the “Jewish conspiracy” in trying to dominate the rest of the world? Do you think these reactions are an expression of the way those societies actually view world affairs, or are they just a way to let out the frustration that their candidate was not elected? Do you think that such rhetoric about “clash of civilizations”, and “Zionist plot” is justified in any way?

I answered this kind of question immediately after my election, and I think that this is already a closed page. I said immediately that I do not believe in the theory about the clash of civilizations. I would like to mention here that more than ten years ago I had the opportunity of participating in a discussion with the author of this thesis, Samuel Huntington, where I rejected it.

I have always believed that this theory is not just wrong, it is dangerous, and this is what I tried to convey in the one-hour speech that I gave when I was sworn into office on October 23, 2009, as the new Director-General of UNESCO. In my view, there is one human civilization, and many different cultures that mutually penetrate each other, there are no walls, no clear-cut individual cultures warring with one another.

If we look at it this way, the role of UNESCO is enormous. I have presented an entire program on how UNESCO should play its role of a guardian of those high moral and humanistic values. From this point of view – and this is something I always underscored in my campaign – I had good relations with the Muslim and Arab World countries.

This is also demonstrated by the fact that I got elected with more than 30 votes in the Council. The votes from the “North” that I received were not more than ten, and I got a total of 31 votes, which shows that I received votes from all regions of the world. Not to mention the voting in the General Conference where I was elected with 167 votes in favor, 7 votes against, and 2 spoiled ballots. And I would like to add quickly that after my election I had over 50 meetings with heads of states and heads governments, ministers, including from all Arab states, who expressed their support.

So the atmosphere here in UNESCO is totally different after the elections, this page is completely closed. This is what happens at elections – one candidate wins, another loses. It is crucial now that we unite the organization, which is my goal, and move forward.

I would also like to add that I have received an invitation for a visit to Egypt, which I will make at the beginning of December 2009. I hope to be able to meet with the political leadership there, and to establish many close connections in the name of the goals of UNESCO.

Yet, with respect to those reactions, have you encountered any negative attitude in your work as the UNESCO Director-General so far? For example, how do you react to Libya’s position which suspended all cooperation with UNESCO, as its leader said, because of your election?

I have received support from all states. Libya did express such sort of attitude for which I am very sorry. I hope that it will be overcome.

I haven’t had any difficulties in my work at the organization so far. To the contrary, I think that I have this very wide support on which I can lean so that we can continue to work for the ideas that UNESCO stands for.

What will be the main priorities in your work as the Director-General of UNESCO? What is your vision for the development of this totally unique organization?

I think that UNESCO is at a very important stage of its development and transformation, I would say, since the whole system of the UN is the object of reform, and the world is very dynamic, the global processes are very dynamic, and we cannot remain in one and the same place.

Of course, I would rank first UNESCO’s role as a moral guardian of these values, of the dialogue among cultures, of the mutual respect of cultures, of diversity, of material and moral heritage.

With the deepening of the globalization this is all becoming more and more important since people are feeling increasingly insecure, and need support for their cultures, for their national and historical roots. UNESCO is playing a huge role in this respect.

Second, with respect to today’s realities, UNESCO must continue to play its role as a leader in education since we can see today that education, in addition to everything else, is a response to the crisis. There is hardly any state which does not speak of more and more education.

And of course, my great ambition is to put an emphasis on science, innovations, and technologies. UNESCO is already doing a lot but in fields such of biospheres, hydrology, or oceanography it can do a lot more through its science programs – also with respect to climate change.

There is a huge field for action, and I have the serious ambition of making UNESCO an organization which is a lot closer to the problems of today’s world – less bureaucratic, more democratic, and a real leader in many fields with regard to other organizations.

Since our ambitions are greater than our funds, we could explore other opportunities including new partnerships through which UNESCO could attract more external funding, and become a lot more active in many fields and countries. So there is a lot to be done.

You know, UNESCO’s greatest advantage is also perhaps its greatest disadvantage if I may put it this way.

UNESCO is a leader in four spheres – culture, education, science, and communications. This is remarkable because there is no other similar organization. This gives opportunities for many-sided views on certain problems.

In addition to that, however, perhaps this could be seen as a disadvantage because oftentimes the critics would say, “Of course, but UNESCO cannot identify with one single topic or one problem, you are overstretched.” So this is both an advantage, and a disadvantage.

In my view, our goal should be to concentrate on a few leading priorities and ideas in each of spheres with respect to the current situation in the world, and to try to be the leaders there.

You are the most obvious example together with Bulgaria’s outgoing EU Commissioner Meglena Kuneva and the Vice President of the World Bank Kristalina Georgieva that Bulgarian women have achieved much greater successes on the international level, i.e. in international organizations, than Bulgarian man. Why do you think that is? Do you see any kind of a pattern here?

It is very pleasant for me that you mention my election in this sense. I deeply respect both Meglena Kuneva, and Kristalina Georgieva, two remarkable women. No, I don’t think there is any difference or pattern. I wish the same kind of successes to the Bulgarian men.