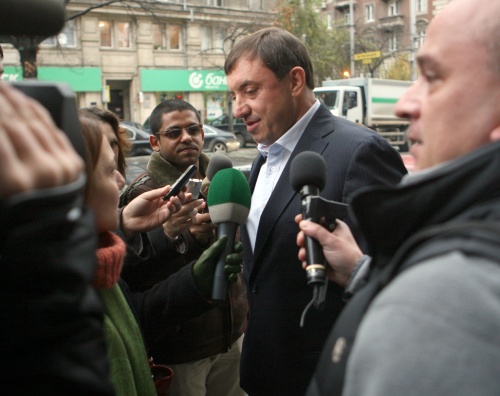 Former DANS undercover agent Aleksei Petrov before his hearing at the DANS Parliamentary Committee. Petrov has threatened to reveal information about those pulling the strings in Bulgaria unless the authorities act adequately. Photo by BGNES

Aleksei Petrov, former secret agent of Bulgaria’s National Security Agency DANS, has threatened to reveal secrets about schemes and actors who had been pulling the strings in the country over the recent years.

“If no measures are taken after what I am going to reveal now, I am going to make public everything the information I have about the ways and methods of control of the political and economic processes during the (post-1989) transition period – including through the elimination – even personal – of people – so that certain aims could be achieved. I will say it publicly,” declared Petrov before his hearing at the Parliamentary Committee for control of DANS on Thursday.

In his words, it is about time that there be more serious talking about national security matters saying also that the specific cases were not even that important, what mattered was general model of developments in Bulgaria. Petrov made it clear he would cooperate fully with the Parliamentary Committee.

“I am going to tell everything to the Committee Chair Ivan Kostov. Let him decide whether to tell you or not,” Petrov told the reporters.

“I would not say I trust the Chair Ivan Kostov but I do trust the institution (i.e. the Parliamentary Committee). Because Kostov has demonstrated that he abuses information he receives, and then interprets it and spreads it his own way,” the former DANS agent stated. He referred to the Galeria spying case where he had been revealed by Kostov as one of the former agents who pressured leading Bulgarian journalists.

Petrov confirmed about attempts to intimidate him. On Wednesday, he distributed a statement to the media saying somebody was trying to intimidate him, and that he saw Kostov’s tactics behind that attempt. Petrov also said he believed there were attempts to use DANS for partisan interests.

The former undercover agent of DANS Aleksei Petrov was in the center of a scandal that led to the resignation of the former Interior Minister from the Socialist Party, Rumen Petkov, in April 2008. Petkov was revealed to have met with the notorious Dupnitsa gangsters Galevi Brothers. While explaining that the meeting was part of his measure to deal with organized crime, Petkov slipped the name of undercover agent Aleksei Petrov.

In 2008, Aleksei Petrov served as an advisor to the former Director of DANS, Petko Sertov.

In October, 2009, Bulgaria’s Prime Minister, Boyko Borisov announced that Aleksei Petrov had walking into his office and given him a copy of a top secret intelligence report from October 2008, which allegedly had been hidden and mishandled by ex PM Sergey Stanishev because it incriminated certain officials and circles with gross violations.

Both Stanishev and former DANS head Sertov are under investigation for mishandling classified information. The incriminating report was later published online by an unknown person.

Before his hearing at the Parliamentary Committee on Thursday, Petrov stated it was not important how he had acquired the report; rather it was more important who published it online.