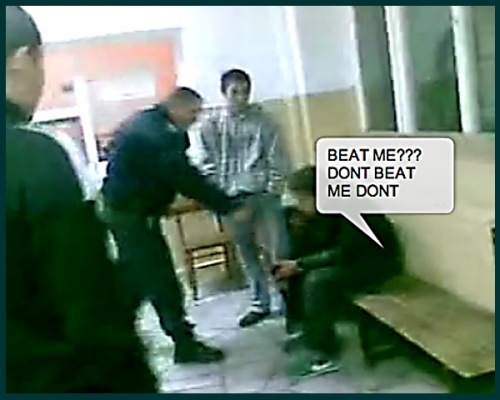 A graphic video of police brutality in Bulgaria is posted on the Internet, triggering a number of official investigations. Video by YouTube.com

The Pleven branch of the Interior Ministry is to carry out a disciplinary investigation of the police officers of the regional Directorate.

This probe has been ordered by instruction of the Secretary General of the Ministry of Interior, their press center announced on Monday.

The reason for the investigation was an amateur video clip posted on the internet.

The video clearly showed, and it was clearly heard, how a policeman from Dolni Dabnik. Officer Filatov made threats and threw insults at 22-year-old Kaloyan Todorov.

"Look how aborted you are! I'll crush you, I'll ruin your life, I'll kill you, I'll kill you!" the officer was heard shouting in the video clip, along with many other obscenities, blows and kicks.

Todorov, along with three other local youngsters, was detained for preliminary investigation for an incident involving a smashed car windscreen of on November 7.

They were pointed out as the perpetrators of the crime by the woman who owned of the car. During the incident all four were not sober. A preliminary investigation was not done, because the father of one of the boys immediately paid BGN 300 for the broken front windscreen.

According to the police, the four youngsters had behaved in an arrogant, provocative manner.

Local police chief Stefan Petrov was unaware of the case, as he was on leave at the time.

Any participation in the event by other policemen is additionally being investigated, said the Ministry of Interior.

The Prosecutor's office has also ordered its own investigation into the entire incident.