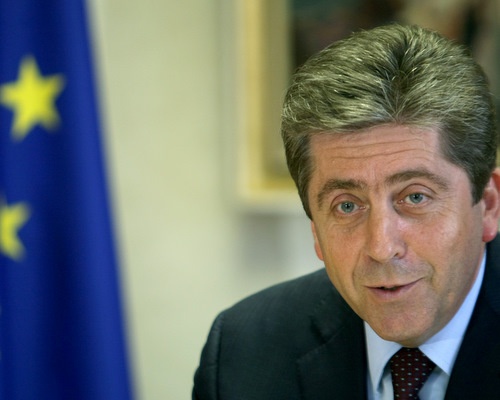 “I can't shake off the feeling that the big mafia bosses are still untouchable,“ President Georgi Parvanov told students on Sunday at a round table, dedicated to the 20th anniversary since the fall of the Berlin wall. Photo by BGNES

Bulgaria's President has harshly criticized the popular new center-right government for its failure to impose measures to combat crime, saying the mafia bosses in the country remain untouchable.

Talking at a round table with students, President Georgi Parvanov described as “fast” and “radical” the moves that the government took in connection with the missing classified reports on crime that led prosecutors to probe former Socialist Prime Minister Sergey Stanishev.

“Why doesn't the government act as swiftly in combating the bosses of the organized crime, who have turned into one of the symbols of the Bulgarian transition?”, Parvanov said. “I can't shake off the feeling that the big mafia bosses are still untouchable.”

The previous government, led by Stanishev, has been hit by a series of corruption scandals. Former prime minister Sergey Stanishev has been accused of losing classified reports on crime, while ex-farm Minister Valeri Tsvetanov has been charged with abuse of power.

Earlier this week Bulgarian prosecutors asked parliament to strip former Labour Minister Emilia Maslarova of her immunity from prosecution so that they can investigate her for large-scale embezzlement.

Bulgaria's new center-right government, which swept the elections in July, is struggling to shake off the country's reputation for rampant corruption and crime, and has pledged to step up the fight against graft. However, the EU newcomer has yet to convict any senior officials and has put only one criminal boss in jail.

In 2008, Brussels suspended several hundred million euros in aid for the Balkan country's failure to crack down on organised crime and graft.