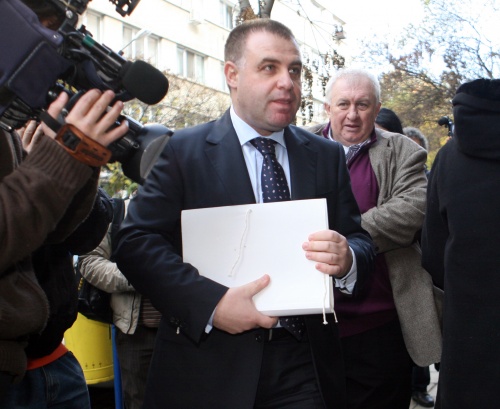 Minister Naydenov pictured here filing the suit against ex-Tsar Saxe-Coburg has been scolded by PM Borisov over a remakt the state was going to win the case. Photo by BGNES

Naydenov recently said he expected the state to win the suits against former Tsar and former PM Simeon Saxe-Coburg for the annulling the restitution of 16 000 decares of forests (plots allegedly owned by the Bulgarian royal family by 1944), and for a BGN 5 M compensation for logging activities over the last few years.

“Minister Naydenov made a gross blunder. He just restated what he heard from the law firm that the government hired. I have personally passed a remark on him for that because he put the court in a very inconvenient situation by saying the government would win the case,” Borisov told Nova TV.

Borisov himself started his political career as Interior Ministry Secretary in the Saxe-Coburg government in 2001-2005. Since taking office, however, his government has taken steps to revise the procedures through which the former monarch received back nationalized properties. The GERB cabinet wants the lands back over a number of alleged violations. Saxe-Coburg got the lands restituted to him during his term as Prime Minister (2001-2005).