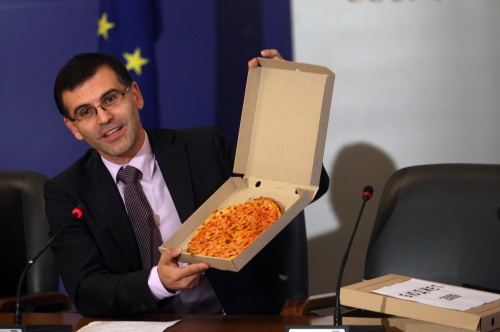 Bulgaria's Finance Minister Djankov compared the 2010 state budget to a small meatless pizza, contrasting it to the 2009 budget which is symbolized by the empty pizza box on the side. Photo by BGNES

This has been announced by Djankov himself as cited Saturday by the 24 Chasa Daily.

The new pizza specialty plays on the metaphor used by the Finance Minister on October 28, 2009, when, upon presenting the 2010 draft state budget, he compared it to a small meatless pizza, which, however, was much better than the 2009 budget which was just an empty pizza box.

Djankov says that those images that he had used have been rather popular and successful but he has not expected to see his metaphor turn into such a big deal.

“Dad, I thought you were in finance, and it appears that you are actually delivering pizzas,” said Djankov’s 5-year-old son, according to the father.

The new specialty “Djankov” is exactly like the pizza the Minister used for his metaphor – meatless, with just one olive.