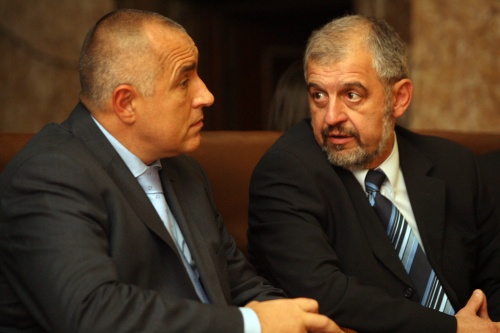 Borisov attended a graduation ceremony of young lawyers specialized in EU law at Sofia University. He responded to the words of Sofia University President, Ivan Ilchev, that there was not enough money for science and academic activities by referring the excessive spending of the former government.

“There is no money because it has been spent. I now have to pay BGN 132 M for last year’s snow cleaning. These BGN 132 M could have been spent on science now,” Borisov said pointing to an arrangement of the former cabinet under which his government now has to assume last year’s costs.

In his words, similar pointless contracts made by the Stanishev government cost the state budget over BGN 1 B.

“We need to give BGN 7,4 B to your grandparents,” Borisov told the graduates referring to the state money for retirement pensions. He made a commitment to change the situation by allocating more money for academic activities the following year.

“Here I must thank French President Sarkozy. It is great that we became friends back in my days at the Interior Ministry because otherwise the corvette deal would not be canceled, and I would have to give BGN 1 B for corvettes now,” the Prime Minister declared referring to the time when Sarkozy was the Interior Minister of France and Borisov himself was the Chief Secretary of the Bulgarian Interior.

During his recent visit to Paris, Borisov canceled the deal for the purchase of 2 French corvettes for the Bulgarian navy worth BGN 1 B, which had dragged on for several years.

“I bow to the Prime Minister of Sweden Fredrik Reinfeldt because of his unique patience when he listened to the positions of all 27 EU states during the negotiations on who is going to pay for fighting climate change,” Borisov said regarding the Swedish EU Presidency and the recent EU Council meeting in Brussels.

The PM has expressed his confidence of the abilities of the young EU law graduates of Sofia University.