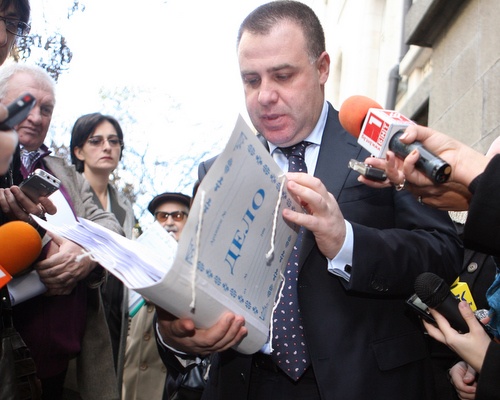 Minister Naydenov shows the documentation to journalists before filing the suit against Saxe-Coburg. Photo by BGNES

Bulgaria’s Agriculture Minister, Miroslav Naydenov, filed Wednesday a suit on behalf of the state for the return of all forest plots restituted to former Tsar and PM Simeon Saxe-Coburg.

In addition to demanding back all 16 000 decares of forest plots in the Rila Mountain that Saxe-Coburg received after 2001 from the state on the grounds that they were owned by the royal family before 1944, the Agriculture Ministry also demands a BGN 5 M compensation from the former monarch for the logging activities in the lands over the last few years.

The suit is backed by 16 volumes of documents which were shown by Minister Naydenov before they were tabled to the Sofia District Prosecutor’s Office.

The Borisov government was previously mulling demanding back only 4 521 decares because they were given to Saxe-Coburg in addition to the plots that he claimed because of an administrative mistake. Only last week did it decide to ask for all restituted lands back in order to put Saxe-Coburg in a position to prove his claims for the state rather than the other way around.

Another reason for claiming all of the 16 000 decares is that in this way the government will be entitled to demand a court-ordered termination of all logging activities there.

In addition to demanding the ownership of the lands in question and a compensation, the suit includes asking for the annulment of the sale of 56 decares to a third party, and an all-out ban on lumbering there.

The question of the so called “Tsar’s estates” has become an issue disgruntling the Bulgarian society in the recent years over doubts that the property was given to Saxe-Coburg unlawfully during his term as Prime Minister (2001-2005).