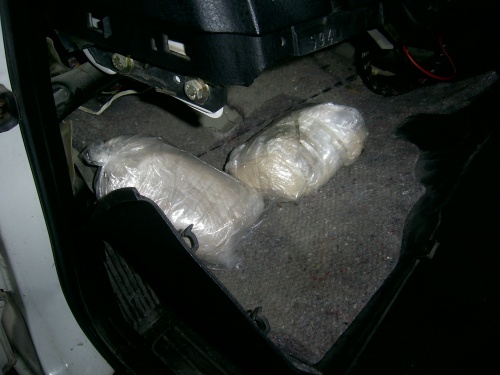 Late Sunday, 5 kilos of heroin were seized in a joint customs and police operation, and a gang of 4 detained. Photo by Customs Agency

An organized criminal gang, engaged in trafficking heroin from Turkey into Bulgaria, has been caught and its operations ended.

In a joint operation by officers of the National Customs Agency, the Unit for Fighting Organized Crime (GDBOP) and the Regional Directorates of Haskovo and Plovdiv, a total of 5 kilos of heroin was confiscated.

The group was using the so-called “Balkan Route” to transport the drugs into Bulgaria.

On the night of November 1, customs officers stopped and checked a BMW car at Kapitan Andreevo border checkpoint. The driver was a 52-year-old man from Plovdiv, identified only as O.T.

Hidden in spaces behind the car’s dashboard, the officers discovered 4 packets consisting of 2 kilos of a brown powdery substance. When tested on the spot, the powder was identified as heroin.

In a follow-up operation, three other participants from Plovdiv have been detained. These three persons, aged between 22 and 39 years, have also not been named.

A search of their luggage uncovered a further 6 packets of heroin, weighing 3 kilos.

Investigations are continuing, according to the Customs Agency.