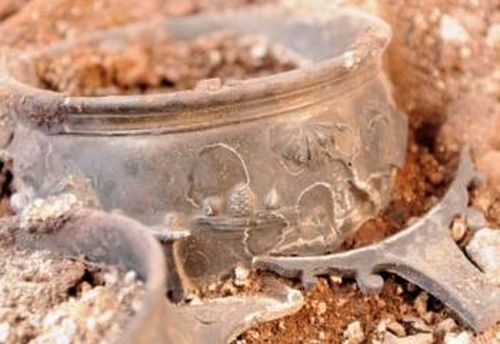 Some of the vessels uncovered in the new Thracian tomb by the team of archaeologist Veselin Ignatov near Karanova. Photo by Bulphoto

A team of Bulgarian archaeologists have discovered a new tomb of an aristocrat from Ancient Thrace near the southern town of Nova Zagora.

The team led by archaeologist Veselin Ignatov found a burial tomb of 12 square meters dated back to the end of 1st century and beginning of 2nd century AD. It is located outside of the village of Karanovo.

The burial site of the Thracian aristocrat contains a number of interesting items including a silver treasure of vessels and artifacts that were place there to be used by the aristocrat in his afterlife.

Those include two silver cups with images of love god Eros, and a number of other ornate silver and bronze vessels.

The archaeologists have also found a chariot and fragments of a shield. The expedition called Karanovo 2009-2010 has just started to uncover their new find, and Ignatov expects a lot more valuable items to be discovered.

The archaeologists from the Nova Zagora History Museum are going to continue their exploration of the Thracian tomb on the spot even during the coming winter months after a special shelter is built on the site.