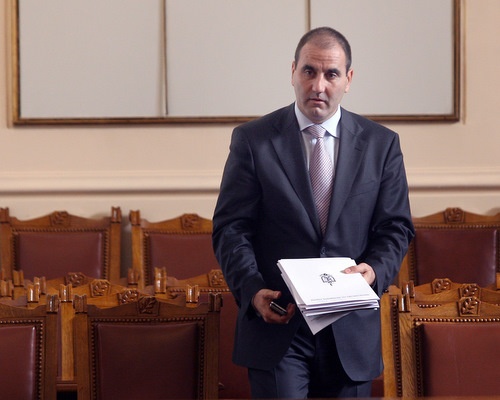 Deputy Prime Minister and Interior Minister Tsvetan Tsvetanov says the series of scandals that have shaken DANS recently aim to settle scores inside the agency and prevent parliamentary control over its operations. Photo by BGNES

Bulgaria's government has made it clear it does not plan to suspend, but to streamline, the operations of the State National Security Agency DANS in the wake of a series of scandals.

"DANS will continue its work but it should do so properly," Deputy Prime Minister and Interior Minister Tsvetan Tsvetanov told the Bulgarian National Radio on Sunday.

"Somebody was interested in hampering the agency operations and luring its heads into leaking secret information instead of doing what it has been set up to do, namely to fight organized crime," Tsvetanov added.

According to him the series of scandals that have recently shaken the agency aim to settle scores inside the agency and prevent parliamentary control over its operations.

The statement comes days after Prime Minister Boyko Borisov threatened to shut down the agency as a year-old top secret report by DANS, which sheds light on the influence of criminal organizations within certain ministries and state agencies, leaked and ended up published online.

According to Borisov, the report was labeled as the copy sent to the prime minister.

The premier said his predecessor Stanishev obtained the document last year but did not return it to the relevant department at the council of ministers and the report disappeared after that.

Under security protocols, all copies of confidential reports are to be returned to the security agency. Borisov said he has ordered experts to first determine whether the report is genuine.

If so, this will put Borisov's predecessor, Sergey Stanishev, leader of the Bulgarian Socialist Party, in direct violation of the law.

The new Prime Minister has urged prosecutors to charge his predecessor Sergei Stanishev and others for the leak of the report, saying it exposed the Balkan country’s inability to tame organised crime.

Borisov is scheduled to meet staff from the agency on Monday in what has been said to be an attempt to show his good will and trust in DANS work.