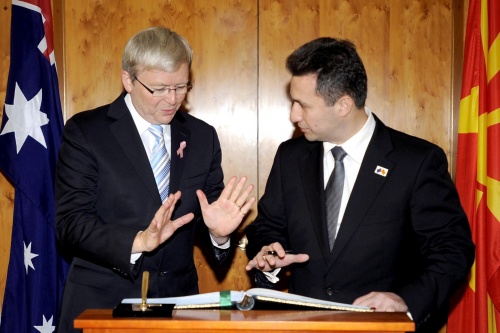 Macedonian Prime Minister, Nikola Gruevski, has stated that his country had no territorial claims towards Bulgaria or any other state.

Gruevski’s words were that the Macedonians in Australia had a unique opportunity that they did not have in the Republic of Macedonia: to live with their compatriots from Aegean and Pirin Macedonia. (The Pirin region of the geographic area “Macedonia” is in Southwest Bulgaria, and the Aegean part is in Greece.)

“Not only does my statement contain any territorial claims but it also has a unifying and pro-European spirit,” Macedonia’s PM said Friday in an interview for the MIA agency which is also posted on the website of the Macedonian government.

“My words have been taken out of context. With respect to the situation of the Macedonian community in Australia I called upon the Macedonians there to have better understand instead of divisions – such as the division based on the church issues – for and against the administrator of the Macedonian Orthodox Church, or based on origin. I said that they live in one state, and added that one day all of us in the Balkans are going to live together within Europe,” Gruevski is quoted as saying.

“The Macedonian question must not be used for quarrels but for peace and unity. I am sorry if someone understood me incorrectly, or my words were referred to them in the wrong way. I am consistent in my statements at home, and abroad,” Gruevski states.