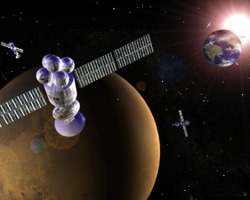 as the Internet turns 40, one of its inventors predicts it will soon surround us, wherever we go. Photo by howstuffworks.com

Celebrities in the world of technology and media, entrepreneurs and specialists celebrated the 40th birthday of the Internet which has changed world culture.

“It’s the 40th year now since the infant Internet started talking for the first time”, said Professor Leonard Kleinrock of the University of California (UCLA), adding that the Internet had changed world culture.

Kleinrock, who headed the team that connected computers online for the first time back in 1969, organized a jubilee party at the University campus, to combine recollections of Internet’s past and a debate on its future.

“There will be continuous disputes as to where we were and where we’re going”, suggested Arianna Huffington, co-founder of the popular website for news and blogs that bears her name. “It’s not only about Internet, it is about the times we live in,” she stated.

“Internet is a democratizing element, every one has the same voice”, stated Kleinrock. He admitted that, four decades ago when his team created the Internet, he never imagined there would be services like Facebook, Twitter and YouTube.

He only thought that computers should be able to “talk” to each other, and that the network should be as simple for use as the telephone.

“The next step is to get into the real world” said 75-year-old Kleinrock. "The Internet will be present everywhere. I will walk into a room and it will know I am there. It will talk back to me."