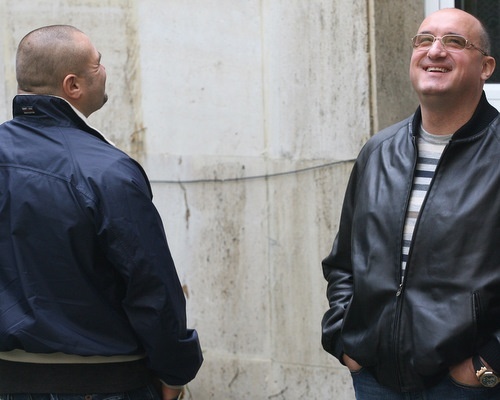 Plamen Galev (R) and Angel Hristov, known as the Galevi brothers, are believed to be a huge factor in Dupnitsa, compared with whom the mayor is a nobody. Photo by BGNES

A journalist from a local Bulgarian newspaper has been awarded in recognition of her courage to expose the criminal activities in the small and impoverished town of Dupnitsa and its benefactors and mafia bosses Galevi.

Lidia Pavlova, who has fifteen years of experience as a reporter and correspondent in a number of Bulgarian newspapers, currently works for the Struma newspaper based in the southern town of Blagoevgrad, located close to Dupnitsa.

She has been awarded the Prize for Courage in Journalism, established by the media group VATZ and the International Journalists Federation.

This is the first time that the prize, which comes with a EUR 10 000 check, is conferred on a Bulgarian journalist.

Pavlova will be honoured with the recognition at the Third Media Forum for Southeastern Europe, which will take place from November 4-6 in Tirana.

For her courageous articles on the activities of Plamen Galev and Angel Hristov, known as Galevi brothers, Pavlova had received threats for her life by them.

The two alleged mafia bosses are believed to hold the citizens of Dupnitsa on a leash, as their jobs and prosperity depend on the two burly former policemen, whose background and businesses are as shady as they can be.

The pair are members of an advisory council to the town's mayor. All key decisions taken by the municipality are greenlighted by them. They supervise the deputy mayors, participate in meetings with investors and join officials' press conferences. Locals say they don't even shy away from using the mayor's office for business meetings.

The Galevi trial came in the wake of a large-scale and ostentatious raid by what appeared to be the state army, which rummaged offices, auto-houses and apartments in he capital Sofia, Pernik and Dupnitsa.

The participation of Plamen Galev and Angel Hristov, charged with extortion and racketeering, in the summer elections highlighted the weakness of the country's judicial system.