Bulgaria President in Australia: Macedonia Seems to Want Our Territories 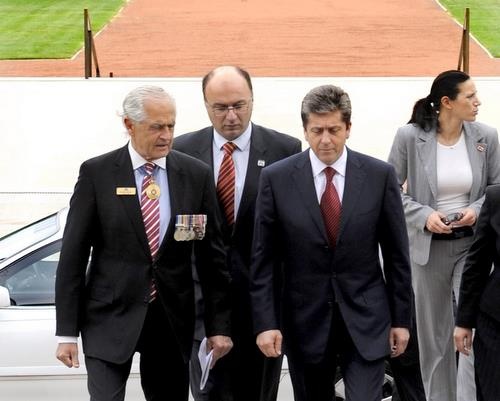 Bulgaria's President Parvanov (right) during his official visit to Australia. Photo by BGNES

Bulgaria's President, Georgi Parvanov, has declared during his Australia visit that a recent statement of Macedonian Prime Minister, Nikola Gruevski, was "unacceptable".

During a news conference in Sydney, Parvanov referred to the words of Gruevski who recently visited Australia as well.

Gruevski’s words were that the Macedonians in Australia had a unique opportunity that they did not have in the Republic of Macedonia: to live with their compatriots from Aegean and Pirin Macedonia. (The Pirin region of the geographic area “Macedonia” is in Southwest Bulgaria, and the Aegean part is in Greece.)

“I am bewildered by the position that has been expressed by the Prime Minister of neighboring Macedonia. I see it as unacceptable, as an expression of territorial claims. It is all the more unacceptable as Macedonia aspires to become a member of the EU,” the Bulgarian President declared in Australia Thursday.

He reminded his position that Macedonia must fulfill strictly all of the EU membership criteria some of which have to do with good neighborliness. In his words, Bulgaria’s support for the EU membership of Macedonia was not unconditional, and that it largely depend on whether the Bulgarian neighbor would withdraw immediately any similar claims.

“The Republic of Macedonia is going to get a date for starting EU accession talks when it resolves once and for all its contradictions with its neighbors. This kind of statements are absolutely in contradiction with our expectations for good political will for solving the problems that the Republic of Macedonia creates for its neighbors,” said Marin Raykov, Bulgaria’s Deputy Foreign Minister, who is part of the Bulgarian delegation to Australia led by Parvanov.

After the two Balkan Wars of 1912-1913, the region of Macedonia was partitioned between Bulgaria, Greece, and Serbia (later Yugoslavia). The Pirin part, which is in Bulgaria, is the smallest. The Aegean part is the largest, and is in Greece. The so called Vardar Macedonia is the territory of today's Former Yugoslav Republic of Macedonia.

Many of the historic immigrants in places such as Australia left the region of Macedonia before the formal proclamation of a Macedonian nation in the 1940s and some of their descendants still hold affiliations with Bulgaria.