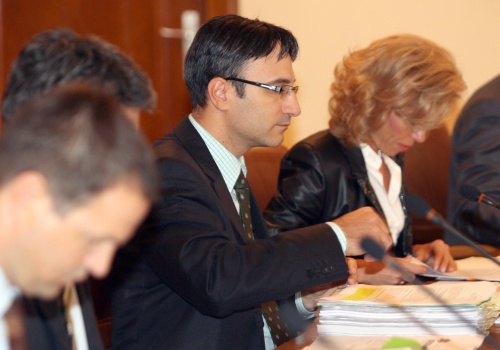 Bulgaria's Economy and Energy Minister Traikov (middle) has said the German company RWE was unwilling to commit to the Belene NPP. Photo by BGNES

Speaking in Parliament, Traikov said the government was currently preparing to pick a consultant that was going to help it select private investors for a share of the future nuclear power plant.

"We wanted to prepare the procedure for selecting a consultant together with RWE but given there reticence for a firmer commitment to the project, we are starting to do it independently, without any more procrastinating," Traikov declared.

The German company RWE has a 49% share of the planned Belene plant but media reports in Germany have recently hinted that the company may give up its part in the project. 51% of the future NPP are held by the Bulgarian state but the new government has decided to reduce the state-owned share and to offer most of it to private investors in order to raise money for the construction.

"The government is taking measures to stimulate the interest and of European and other companies in the Belene project in order to make it a Europe-wide initiative," Traikov declared.

In his words, the state will need about a month in order to pick a consultant for selecting new Belene investors. The Minister also pointed out that the contribution of the consultant will be of extreme importance regarding whether Bulgaria was going to go ahead with the Belene project at all.