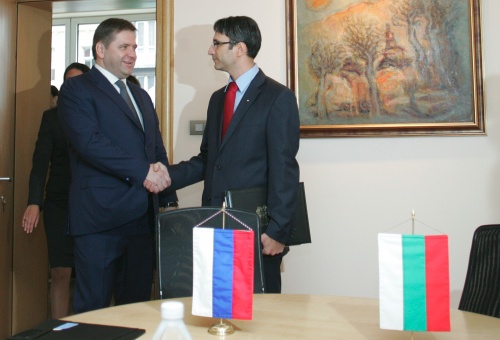 The Russian side has supplied Bulgaria with detailed information on its plans for the expansion of the South Stream gas transit pipeline project.

This has been announced by the Russian Ministry of Energy after Thursday’s meeting in Moscow between Bulgaria’s Minister of Energy, Economy, and Tourism, Traicho Traikov, and the Russian Energy Minister, Sergei Shmatko.

“The increasing of the volume of the South Stream pipe is going to solve many of the issues regarding the Russian gas supplies for Bulgaria,” the Russian Minister Shamtko said as quoted by RIA Novosti.

The Russians have suggested that all options for the construction of the South Stream gas pipeline should be considered including the controversial option, which is opposed by many in Bulgaria, of using the existing Bulgarian gas transit network.

Bulgaria and Russia have also set up a working group on the South Stream pipeline which is to draft an agreement between the shareholders, a status of the joint company, and the execution of technical and economic analyses of the project.

The corporate and technical issues of this kind will be discussed by the experts of the two sides on October 28, 2009.

The construction of the Belene Nuclear Power Plant and the Burgas-Alexandroupolis oil pipeline, the other two large-scale joint energy projects, has also been discussed by Traikov and Shmatko.

Both sides have expressed their interest in the deepening of the bilateral cooperation in the energy sphere.