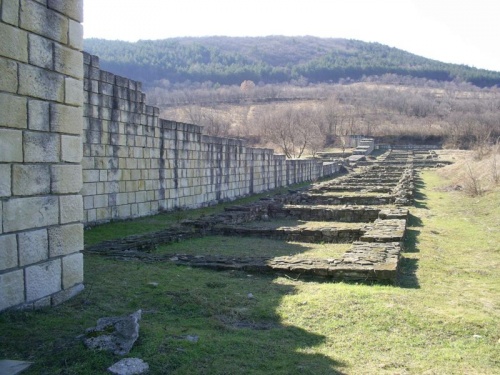 Archaeologists have discovered the limestone quarries used for extracting the stone blocks for Veliki Preslav.

Archaeologists have solved a long-standing mystery by finding the limestone quarries that Bulgaria's Tsar Simeon I The Great (893-927 AD) used to build his imperial palaces.

The quarries are located close to the village of Srednya, Shumen District, Northeast Bulgaria, just 15 km away from Simeon’s capital city Veliki Preslav.

The spot has been found by accident by employees of the Shumensko Plato (“Shumen Plateau”) Natural Park, who were mapping the region.

They saw a small cave, and thought that was a small rock monastery of the type that have been found elsewhere in Northeast Bulgaria because there was rectangular spots in the walls of the cave that looked fit for placing icons.

Only later did they bring specialists from the Shumen Regional History Museum to the spot.

“When I saw all that, I nearly passed out. I needed several minutes to realize what was in front of my eyes was an old quarry,” said Georgi Maystorski, Director of the Shumen Museum.

After their initiate explorations on Wednesday, the archaeologists are 100% sure that they have made an absolutely unique discovery, solving a mystery that scientists had been trying to resolve for about 100 years – i.e. where did the materials for the enormous and marvelous construction projects of Tsar Simeon I The Great came from.

In their words, the structure of the stones at the site of the quarry is exactly the same as in the ruins of the imperial palace and fortress walls of Veliki Preslav.

At a depth of about 1 m, the archaeologists discovered tiny, broken pieces of stones, which means that the stone blocks were refined on the spot before being transported to the capital city with ox carts. .

“In the quarry we have also found Old Bulgarian runic sings characteristic of that age, pieces of pottery, and the sign of the Bulgarian rulers,” Maystorski said adding that there might be several more quarries in the region.

The geological analyses are still to come but there are already 10 archaeologists working on the spot, including specialists from the Bulgarian Academy of Sciences. They hope to have fine weather in the next two weeks in order to be able to make progress on their research, as well as to find funding for their work.

Tsar Simeon was the ruler of the First Bulgarian Empire in 893-927 AD, shortly after Bulgaria adopted Christianity in 864, and the Slavic script in 886. He is known for expanding Bulgaria from Constantinople and Athens to Central Europe (today's Hungary), and for boosting the cultural and religious activity.

Veliki Preslav ("Preslav the Great") became the first Christian capital of Bulgaria in 893 AD. Much of its marvelous architecture was modeled after that of Byzantium's Constantinople in order to rival the power of the Byzantine Empire.