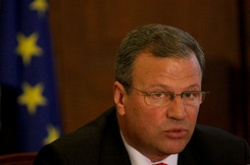 Yurukov is charged under Article 220, Para 2, of the Bulgarian Penal Code with deliberately concluding four disadvantageous deals that damaged the state, with a total value of BGN 12,7 M.

These deals related to exchanges of property that are joint privately- and state-owned with others that are exclusively private, at particulalry unfavourable conditions for the Bulgarian state.

Three of the barter deals are for properties on the Black Sea coast, said Sofia City Prosecutor’s Office. All four deals were concluded between January 23-26, 2009.