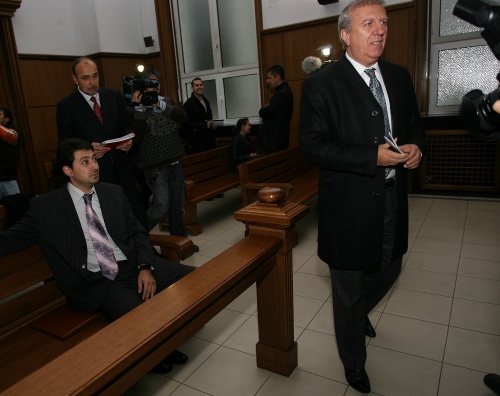 The ex-President of the CSKA Football Club, Alexander Tomov, faced the Sofia Court Tuesday over charges of fraud and embezzlement. Photo by BGNES

The former Minister of Economy and Energy, Petar Dimitrov, had pressured prosecutors to initiate proceedings against the ex-President of the CSKA Football Club, Alexander Tomov.

The statement was made by Tomov himself in the Sofia City Courtroom where his trial for document fraud and embezzlement of over EUR 5 M from CSKA and BGN 29 M from the now closed steel mill “Kremikovtzi,” resumed Tuesday.

In May, the Sofia City Court postponed proceedings against Tomov because he was officially registered by to run at the parliamentary elections.

Tomov, who is also the leader of the “Bulgarian Social-Democratic” party and former CEO of “Kremikovtzi” accused Monday ex-Prime Minister, Sergey Stanishev, in breaking the law by issuing an order to the State Agency for National Security (DANS) to probe the CSKA football club. Tomov informed that he had a videotape with Stanishev on it as proof, which he had submitted to the prosecution.

The former CSKA President defined the accusations against him as preposterous, reiterating Stanishev and the circle around him attempted to use the same schemes to take over “Kremikovtzi” as they did with CSKA and that both the mill's and the club's financial troubles were staged and “Kremikovtzi” forced into bankruptcy.

Tomov claimed his financial operations at the steel mill were part of a plan to rescue both “Kremikovtzi” and the football club, but it failed because of the actions of the former cabinet and the use of DANS for political orders.

If proven guilty, Tomov faces between 10 and 20 years behind bars.