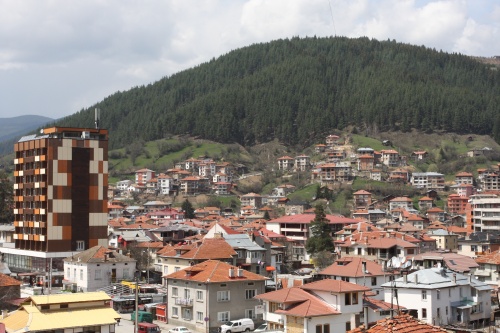 Civic organizations from the picturesque mountain town of Chepelare are protesting against a future mining concession. Photo by BGNES

The Council is going to demand that the Ministry of Environment and Water not issue a permit to the Canadian company for the exploitation of the copper and gold deposits in the village of Yugovo.

“The Chepelare Municipality does not want the gold mine that the government is trying to sell to it,” reads the press announcement of the Public Council, which is said to include representatives of local businesses, the municipal administration, and NGOs.

The Chepelare Council states that the Canadian company Dundee Precious Metals uses the cheapest method for extracting gold which involves the release of highly toxic cyanides. The local people are concerned that this might destroy the local nature, tourism, and forest gathering (i.e. of herbs, mushrooms, wild honey, etc) which is their main means of earning a living.

It is also expected to affect the Narechen Mineral Springs, and the tourism potential of the top Bulgarian mountain resort Pamporovo.

The Chepelare Public Council is planning meetings with Bulgarian Ombudsman Ginyo Ganev, Members of Parliament, joint actions with the Luki Municipality, and civil disobedience. It claims to be conducting its actions in accordance with EU regulations on transparency, publicity, local government, and civic inclusion.

Chepelare is a town of about 6 000 residents located in the Rhodoppe Mountain, 75 km south of the city of Plovdiv, and 10 km north of the resort of Pamporovo.

Dundee acquired its two gold assets in Bulgaria in 2003. The local populations of Chelopech and Krumovgrad are not known to have opposed the company's mining activities so far.