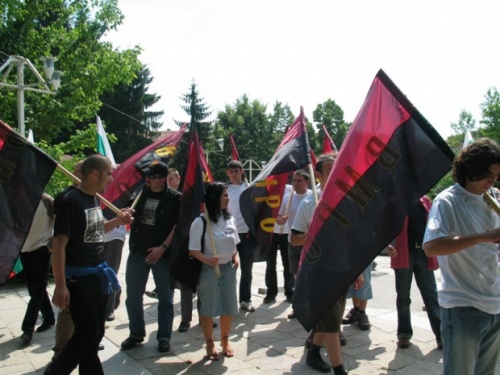 Small groups of Bulgarian nationalists have been staging intermittent protests against religious sects throughout the country in the recent months. Photo by Darik News

There are about 15 "totalitarian and destructive" religious sects that are currently active in Bulgaria.

This has been announced by Prof. Ivan Zhelev, Chair of the Center for Research of New Religious Movements (CRNRM), an NGO, during an international seminar in Varna entitled, “Educational Institutions as a Main Target of Sectarian Activity”.

The seminar has been organized by the CRNRM and the Varna and Veliki Preslav Bishopric of the Bulgarian Orthodox Church.

Zhelev said many of the 120 religions registered in Bulgaria were fictitious, and that if the state undertook a campaign to inspect them, their number would drop to no more than twenty.

As examples of destructive religious sects, Zhelev pointed to the Church of Moon and Scientology who targeted high-level state officials, intellectuals, university professors and students. He also said the Jehovah’s Witnesses had become very active.

Among the most active “destructive” sects are the Jehovah’s Witnesses, the Krishna Followers, and the Charismatists, according to Prof. Alexander Dvorkin, Director of the Center for Religious Research and of the Russian Association for Studying Religions and Sects.

In his words, several Russian sects including the Followers of Visarion, of Anastasia, and of Norbekov are also active in Bulgaria.

The Russian professor has warned that periods of crisis and stress increased people’s susceptibility to being influenced by destructive religious movements.