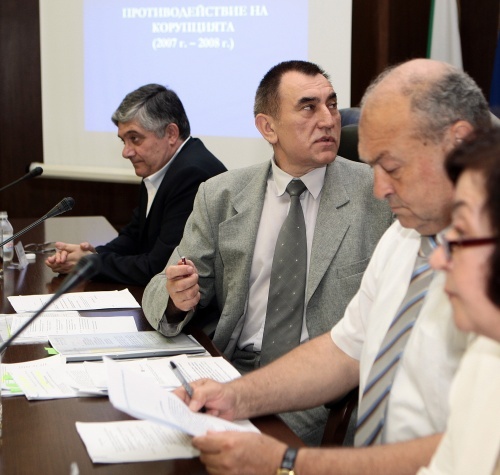 Stoyko Stoev (middle) is one of the VSS members, whose name came up in an alleged corruption scheme. Photo by BGNES

The three members of the Bulgarian Supreme Judicial Council (VSS), whose names popped up in a corruption scandal, are under increased pressure to submit their resignations.

On Tuesday, the Bulgarian Judges Association (SSB) asked for the magistrates, members of the Supreme Judicial Council (VSS), Stoyko Stoev, Ivan Dimov and Plamen Stoilov, to be immediately removed from their posts over their reported connection with the man known as “Krasio from Pleven.” The latter is an an individual who, allegedly, offered magistrates to secure their appointment to high ranking positions through the vote of the VSS in exchange for EUR 200 000 in cash.

Also Tuesday, the rightist Democrats for Strong Bulgaria (DSB) voiced the same request and reiterated demands for a radical reform of the Bulgarian justice system, while colleagues of the three from VSS said resignation would be the most reasonable move in this situation.

DSB further say the silence of the ruling Citizens fro European Development of Bulgaria (GERB) party regarding the corruption scandal is unacceptable and they will request an emergency meeting with the GERB leadership and the Justice Minister.

SSB declared the removal of those who have had contacts with Krasio is a must before quilt is proven beyond reasonable doubt and backed DSB in their demands for immediate measures to reform the system.

Krasio has been identified as Krasimir Georgiev, 27, from the northern city of Pleven, where he has a share in the disco bar “Anaconda” and is described as a “dark skinned man wearing many gold chains and using luxury cars and a driver.”

A month ago, Georgiev was charged with perjury over telling interrogators he never knew any magistrates.

Kolev said then the whistle blowing came from one magistrate, who in the last few days had submitted his application for a high ranking job within the legal system.

The man reportedly promised that for the above amount he would secure anywhere between 8 and 13 votes from the Supreme Judicial Council.

At the time Chief Prosecutor, Boris Velchev, criticized Kolev, saying he interfered with the investigation by talking to the media first.

The VSS appointed a committee last week to probe the case. They informed Monday that for now they are dealing only with the three VSS members while the other 30 magistrates, who, allegedly, had also been in touch with Krasio will be investigated later along with politicians whose names were found listed in Krasio's “black book.”

It was also revealed recently that Krasimir Georgiev worked in 2005 for the election campaign of the party of former Tsar, Simeon Saxe-Coburg, National Movement for Stability and Prosperity, (NMSP), in the city of Pleven, where the ballot was led by former Finance Minister, Milen Velchev, who admitted the connection saying the party rented a room from Krasio at the time.

When asked by the TV channel bTV how did the relationship end, Milen Velchev replied: “It is ongoing; we still talk once in a while,” adding he discussed with Krasio the VSS scandal.

“He of course denies all allegation and I tend to believe him because someone like him, without the strong resources of leading politicians cannot influence the VSS vote,” Velchev said. He, himself, denies ever asking Krasio for similar favors.