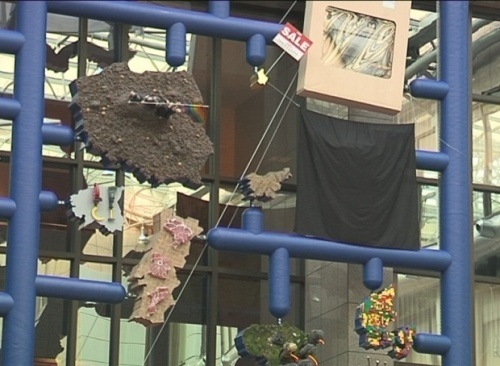 The Entropa exhibit spurred an international scandal as the Bulgarian institutions reacted over Bulgaria's depiction as a squat toilet, leading to the countryвЂ™s image being covered with a black cloth. Photo by BGNES

The news was reported by the Plovdiv City Hall press center and comes on the heels of a declaration of municipal councilors from the nationalist Ataka party saying it is unacceptable for the man who depicted Bulgaria as a Turkish toilet to be welcomed in the country.

Cerny's exhibit was scheduled to open in Plovdiv on October 10 as part of the project of local curator, Emil Marazchiev, titled “Reflections of the Future or European Art 20 years after the Iron Curtain .”

“I ban this man from setting foot in any municipal property in Plovdiv because I cannot reconcile with the mockery of Bulgaria. He is not wanted in Plovdiv. Bulgaria is a country with ancient history and culture and his interpretation is ignorant and absurd. Marazchiev can meet Cerny at a coffee shop or some other private establishment,” Atanasov is quoted as saying.

The Czech Republic, which recently gave up the six-month presidency of the European Union, and Bulgaria are still reeling from the scandal caused by Cerny's satire of European stereotypes in an installation at the European Council building in Brussels called "Entropa".

The piece, which was mounted in Janaury, was supposed to proudly display unique traits of each country in the union. Instead, it depicted Bulgaria as a Turkish toilet, Catholic Poland as a group of priests raising a gay flag and Germany as a network of motorways eerily resembling a swastika.

Only Bulgaria protested against the way it has been depicted, which resulted in the toilet being draped in a black cloth, making it even more visible.

According to information of Plovdiv nationalists, Cerny plans to put on stage at the upcoming exposition namely this black cloth.