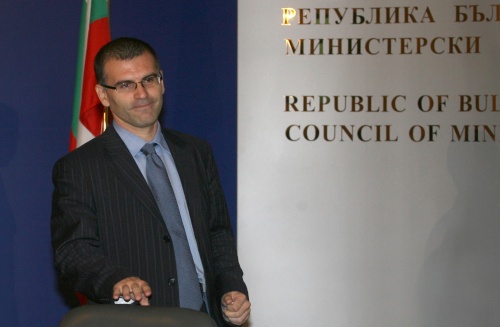 Finance Minister Djankov said Bulgaria was going to issue Eurobonds in the spring of 2010 in an interview for Dow Jones Newswires. Photo by BGNES

From The Wall Street Journal

ISTANBUL (Dow Jones)--Bulgaria is increasingly unlikely to seek an emergency loan from the International Monetary Fund and may seek to launch a Eurobond early next year to meet its external financing needs, Finance Minister Simeon Djankov said Sunday.

"The need for Bulgaria to access an IMF loan is diminishing," Djankov said in an interview with Dow Jones Newswires at the IMF annual summit in Istanbul.

"On the expenditure side and on the price side, Eurobonds are starting to look promising... we are seriously considering one in the spring," he said, adding that the size and maturity would be determined once budget discussions had concluded in November.

The finance minister, a former World Bank chief economist, said the decision not to tap the IMF was more straightforward because Bulgaria would not qualify for the multilateral lender's new flexible credit lines, which offers loans without intrusive policy prescriptions.

"I have not considered this (flexible credit) option because I know Bulgaria would not qualify," Djankov said.

Bulgaria, the E.U.'s poorest member, relied on foreign funding for a quarter of its gross domestic product last year, but has so far avoided the route taken by richer neighbors such as Romania and Hungary, which received IMF-led rescue packages.

The Treasury chief, who has won plaudits for bearing down on Bulgaria's expanding budget deficit even amid the first recession in a decade, forecast the economy would return to growth next spring, adding that it would "very soon" be in a position to formally apply for membership of ERM2, the exchange-rate mechanism which serves as the waiting room for adoption of the single currency.

"I have had detailed discussions with euro-zone finance ministers on how best to enter ERM2... we will formally apply very soon," he said.

In Bulgaria, where an environment of sinking tourism revenue and shuttered factories has replaced a tidal wave of real estate and steel industry booms propelled by foreign capital, the economy has avoided the double-digit economic contractions seen in Latvia, Lithuania and Estonia.

Unemployment is rising and forecast to surge later this year, while the E.U. newcomer's appeal as a low-cost labor base is vanishing as the crisis intensifies, potentially hampering an export-led recovery.

Djankov also said that negotiations to sell a stake of up to 30% of the planned Belene nuclear plant, which the government estimates will cost as much as EUR9 billion, were making progress, with two investors "very interested" in submitting bids before the November deadline.

Germany's RWE AG (RWE.XE) owns a 49% stake in the Belene project, which has already been contracted to a Russian firm.

Commenting on IMF chief Dominique Strauss-Kahn's proposals to make the Fund the world's lender of last resort, the finance chief said: "I think its a far-fetched statement... the IMF first needs a shift in its thinking to reform its governance structures."