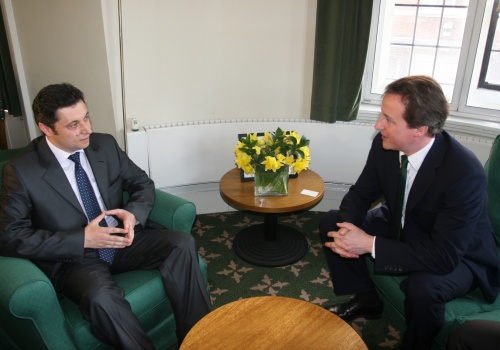 Yanev (left) and Cameron (right) during their first meeting in May 2009 when the RZS party got an "endorsement" by the UK Conservatives. Photo by BGNES

The Chair of Bulgaria’s Parliamentary Anti-Corruption Committee, Yane Yanev, will attend the regular annual conference of the UK Conservative Party on October 5-8, 2009.

Yanev, who is the leader of the Bulgarian “Law, Order, Justice” party (RZS), which also identifies itself as conservative, has been invited to the UK Conservatives forum together with his deputy, Dimitar Abadzhiev.

The news was announced by the RZS press center. The conference of the UK Conservative Party, which is expected to win the parliamentary elections in March 2010, includes panels on the various policy sectors.

During their visit to England Yanev and Abadzhiev are going to meet with party chairs and MEPs from the Union of European Conservatives.

Shortly before the June 2009 EU Elections, and Bulgaria’s Parliamentary Elections in July, Yane Yanev and his RZS party surprisingly received the “endorsement” of UK Conservative Party leader, David Cameron, who described Yanev as his partner in Bulgaria.