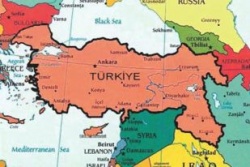 Armenia, and regions of Bulgaria are considered part of Turkey in new Turkish textbooks.

The news came from the Turkish Ekolay website which also posted the map.

A CD with major errors is added to manuals of Istanbul schools. In particular, Armenia, Eastern Thrace (part of Bulgaria), Western Thrace (part of Greece), Iraqi Kurdistan (Mosul, Kirkuk), the Greek part of South Cyprus, part of Georgia, including Batumi turned out to be incorporated into Turkey.

The textbooks include other mistakes as well. For instance, Turkish national holiday — Victory Day was not even mentioned, the Armenian news agency, news.com, reported.

The books were handed during the solemn ceremony. The head of Educational department of Istanbul expressed regrets on the matter that such errors had occurred.