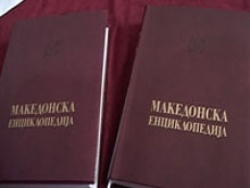 The Macedonian Academy of Science and Art has decided to stop selling the new Macedonian encyclopedia, and to correct the disputed texts, after Bulgaria criticized some of the content in the book.

The Academy expressed concern over the fact that the encyclopedia had caused “fierce controversy” and “unintentionally become a source for new ethnic tensions in Macedonia.” They confirmed that they would correct inaccuracies, especially regarding Albanian minorities, but would keep the historical facts the same.

The Presidency of the Academy also expressed regret for the inappropriate wordings used in some unintentional copyright texts, which have prompted reactions from the UK, US and Bulgarian Embassies in Skopje, Bulgarian National Radio reported.

Macedonia's President, Gjorge Ivanov welcomed the decision by the Academy to withdraw the encyclopedia from sale.

Last Friday the Bulgarian Embassy in Skopje issued a statement, saying that the content of Macedonian Encyclopedia had the single purpose of collecting political dividends.

Immediately after its publishing, the Macedonian Encyclopedia raised numerous reactions. The parties of ethnic Albanians living in Macedonia were the first to slam certain content of the publication, and reactions from the UK and US followed shortly after, the news agency Makfax said.