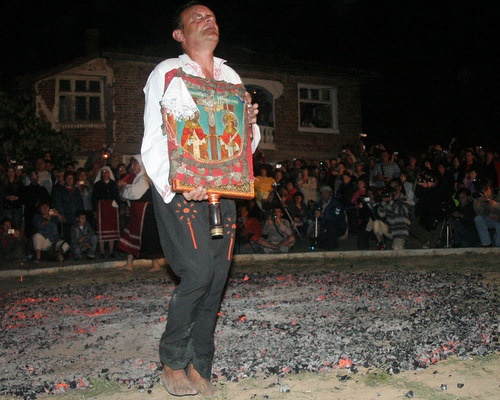 The Bulgarian traditional fire dancing (nestinari) has been declared a part of the world's cultural heritage by the United Nations.

The status aims maximum preservation and transmission of this thousands of ages old tradition.

According to the 2003 Convention for the Safeguarding of the Intangible Cultural Heritage, the intangible cultural heritage (ICH) – or living heritage – is the mainspring of our cultural diversity and its maintenance a guarantee for continuing creativity.

Intangible Cultural Heritage means the practices, representations, expressions, knowledge, skills – as well as the instruments, objects, artifact and cultural spaces associated therewith – that communities, groups and, in some cases, individuals recognize as part of their cultural heritage.

Fire dancing is Bulgaria's second item included in the list of the world's intangible cultural heritage. In 2005, the traditional Bulgarian songs choir “Bistritsa Grannies” was include, too.

Fire dancing (nestinari) is an ancient pagan mysterious ritual - barefooted dancers (nestinari) in a trance, performing on burning embers. When the Christianity entered in the Bulgarian culture, this dance has been transformed – dedicated to Christian saints. The dancers began to perform it, holding in hands an icon. It is a religious and mystical ritual for expelling illness, for health and fruitfulness.

The tango dance has also been included in the United Nations protected traditions during the latest UNESCO meeting.