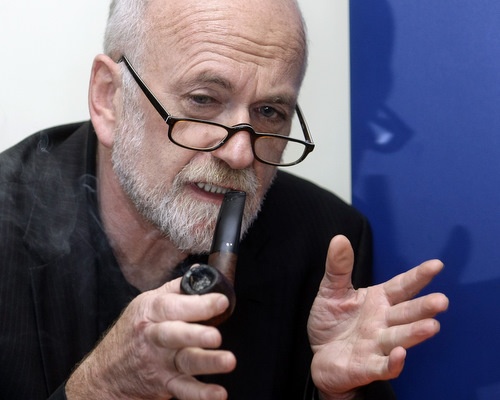 Novinite.com exclusive interview with Jurgen Roth, a top German investigative journalist and a thorough analyst of organized crime and the mafia in the countries from Central and Eastern Europe. Author of bestsellers like The Red Bosses, The Grid of Terror. The Oligarch, Gangsters of the East, The Germany clan and The New Bulgarian Demons, which deals with the situation in Bulgaria. Following a few trips to the country and based on personal contacts and carefully researched sources, Jurgen Roth lays out the point of view of an independent observer on crime, corruption, "the business rings" and the lack of law and order that have represented the Bulgarian political reality for the last two decades.

How come a German investigative journalist as you developed an interest in the way organized crime works in the Balkan country Bulgaria?

The main reason is what the winner of the Nobel Peace Price 1986 and famous Elie Wiesel stated: "We must always take sides. Neutrality helps the oppressor, never the victim. Silence encourages the tormentor, never the tormented." And the victim of organized crime is every citizen. I have been working for 25 years on organized crime and obviously it is worth researching the situation not only in Germany or Italy, but also in the Balkan countries like Bulgaria. Because organized crime is not a national problem, it’s an international cancer destroying democratic systems and Bulgaria is an important part of this transnational organized crime. These are the reasons why one should follow what is happening in Bulgaria.

How far have “The new Bulgarian demons” spread?

The new Bulgarian demons are widespread - in the past 20 years till today. The influence started with the old criminal nomenklatura which had occupied the state institutions. The normal people had to pay the bill for all criminal acitivities, because they did not have in the past a real chance to participate in democratic decisions. These were made by people who were only looking to fill their own pocket.

You have made serious accusations about the hegemony between politics, economics and organized crime in Bulgaria. Did Bulgarian justice system react to any of these alerts?

No. Why should they react, when a foreign journalist is accusing this system of unjustice? They didn’t react in the past when Bulgarian journalists and authors wrote about the same problems.

Your scandalous statements about former Interior Minister Rumen Petkov and his links to the underworld prompted him to threaten you with a slander trial. Is he a typical Bulgarian politician?

What was scandalous? I hope he was a typical Bulgarian politican and I hope that he and his supporters will now be history. You know what his statement against me was? “The liar, the slanderer, the spineless swindler must be hit in the mouth, the hands and all parts of his body.” Such a so called “politican” has still influence in his party. This is scandalous!

In Bulgaria you have come under fire over facts and statements in your book that were said to be questionable at best. What is your answer?

My answer is very simple. There are two or three mistakes in the book and the main reason was a mistake in the translation from German to Bulgarian language. And these mistakes are politically used as a serious argument that the whole book is not serious. Yes, I made some small mistakes. These “mistakes” are a cheap reason not to discuss the main target of the book – the power of organized crime in an democratic system.

How bad is the situation in Bulgaria in comparison with other Eastern European countries and its neighbours?

There are only small differences between Bulgaria and Romania and other eastern countries. The different thing about Bulgaria is that the citizens and a lot of journalists are talking and writing about this problems and they try to change this dramatic situation. But in the past there was no impact to what they wrote. Okay. Some of them are therefore killed and beaten – that’s the difference to their western counterparts. The western governments are only focusing on Bulgaria, but they are not talking about the more or less same situation in Romania, Poland, Hungary, Greece or Italia. And what about the real Mafia State Kosovo?

How do you explain Bulgarians’ hype over the election victory of new Prime Minister Boyko Borisov?

The citizens of Bulgaria are again and again hoping that the criminal and corrupt networks in Bulgaria could be finally destroyed and the fight against corruption could be successful. His image as a non-standard and successful politician and as the only alternative of the thefts, lies and inefficiency of the triple coalition before that were a danger for the country, has been imposed methodologically and for a long time by the mass media and that leads to the enormous support by the voters. This is how he managed to gain approximately absolute Parliamentary majority. Boyko Borisov promised a lot and many citizens believes he will really act now. It is also sure that he is no new Messiah.

How would you comment the parallels that Borissov has evoked with the country's communist leader Todor Zhivkov?

That’s a great problem. More crucial is his relationship to the main sponsor of his election campaigns, Valentin Zlatev, the CEO of Lukoil Bulgaria – a company included in the family companies of the Russian giant LUKOIL. Borissov and Valentin Zlatev do not deny their friendship. After being elected as a Prime Minister and in spite of his declarations that he is going to remove the political umbrella he did nothing in this case. As Prime Minister Boyko Borissov has nominated as a Governor of the Sofia District the Mayor of Pravets, the native town of Valentin Zlatev and Todor Zhivkov. So it seems that there are plenty of contradictions in his behaviour.

You recently called on Prime Minister Borisov to investigate the business group TIM. Are you an optimist about the promised all-out war on organized crime by the new government?

There are a lot of decisions which are a clear signal that he really wants to fight against organized crime and their networks in state institutions. There are also a very few signals showing the opposite. The investigations concerning TIM will be a touchstone for him and his government.

Your letter was triggered by dozens of alerts by citizens of the coastal town of Varna. Does that mean they had no one to turn to in their own country? Do Bulgarian journalists fear to write the truth?

This was the main reason for the citizens of Varna - in Bulgaria they had no chance and it’s tragic that a lot of journalists fear to write the truth. They could remember very well what happened to their colleagues who were writing the truth in Bulgaria. It’s also a problem that many journalists can only write what the editors and (more importantly) the shareholders want to be written. A big Bulgarian newspaper wrote that I got 200.000 Euro from a Bulgarian editor, who criticized TIM in the past. You can imagine the influence of journalists in disinformation! So the main question is who is behind some newspapers that write pure desinformations to protect big companies and their financial interests.

Do you believe in democracy with muscles?

I believe only in democracy with the participations of all citizens and transparency in any part of the political decisions and the legal system. This is a long process - but there is no alternative. We all, not only Bulgaria, need more muscles in the brain.

Two years after its accession to the European Union, Bulgaria has failed to clean up its act in the justice and home affairs. Is Brussels’ love not tough enough?

In Brussels there are different opinions about how to act concerning Bulgaria. If we discuss this problem seriously we must accept that we have the same problem with Italia, where Silvio Berlusconi and his ruling party are acting . Their links to the Mafia are well known. But you have until till now a justice which is independent. Berlusconi makes his own laws to protect his dubions friends and him personally, using the power of newspapers and television to fight against his opponents. What is so diferent in Bulgaria? So you could ask, why Bulgaria is beaten with sanctions and not Italia? I’m convinced that the decision to use sanctions or not against organized crime and corruption are a politcal instrument.

Is there a hope for what you have described as Bulgaria’s “despairing hopelessness”?

Sure. It’s in the hand of the citizens, like in Varna, to fight against organized crime and the structures behind it. I believe that the journalists have to do their job, to investigate and to inform the people, also to press the political elite to change this unworthy situation of hopelessness. I still hope that Boyko Borisov, despite what I know about his past, will do his best, that civil courage without fear will be in the future standards of living in Bulgaria. Don’t destroy my hope!