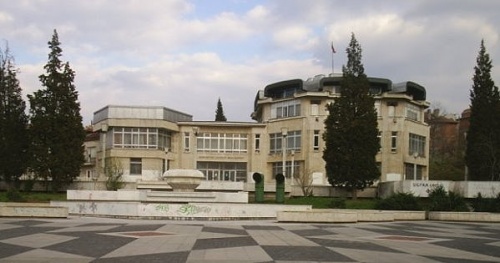 The Asenovgrad town library seems to have hosted an international neo-Nazi meeting on September 12, 2009. Photo by asenovgrad.org

The meeting allegedly took place in a space of the town library, the BGNES agency reported. It was a concert of neo-Nazis which was attended by people from Switzerland who called for the supremacy of the white race and destruction of all other races.

The Ku Klux Klan meeting was revealed thanks to a special police investigation, which discovered that the space in question, owned by the town library had been rented by various persons without any payments, and its electricity bill had not been paid in four years.

The already fired librarian Ekaterina Hristeva gave the key for the hall to Anton Sariev, a member of a local rock group. Sariev claims the reports about a Ku Klux Klan meeting in Asenovgrad are nonsense.

However, the Asenovgrad Mayor, Dr. Hristo Grudev has announced that photos of the Ku Klux Klan meeting in the town had been discovered in a Swiss neo-Nazi website.

In his words, the photos show skin heads wearing swastikas that give a Hitler salute to a person on the stage dressed as a Ku Klux Klan member who appears to be preaching.

According to the Maritza Daily, a local newspaper in the city of Plovdiv, the concert in Asenovgrad was also attended by neo-Nazis from Canada. The concert lasted five hours, and those attending it shouted "Kill the Jew" while bumping into each other on the dance floor. The performers were the local rock band "Rodna Zashita" ("Native Protection").

The moment that information about the Ku Klux Klan meeting in Asenovgrad leaked to the local authorities, the photos and all relevant information about it were deleted from the Swiss neo-Nazi website, whose exact name has not been revealed.

The Mayor of Asenovgrad stressed that the racist happening was uncovered by accident, as he ordered an audit of the municipally-owned assets. Shotly after that, the Bulgarian intelligence services have alerted the local authorities about information they had of a Ku Klux Klan meeting in the town.

The case is still under investigation.