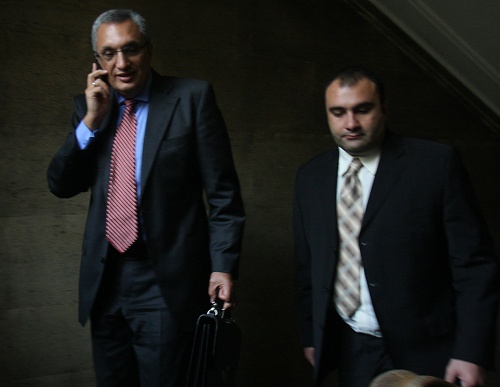 Ivan Kostov (left) before Thursday's sitting of the Parliamentary Committee for controlling DANS. Photo by BGNES

A second spying case of the Bulgarian National Security Agency (DANS) similar to the notorious one known as "Galeria" might have existed to exert pressure on the media.

This was announced Thursday by Ivan Kostov, Co-Chair of the Blue Coalition and head of the Parliamentary Committee for controlling DANS.

Kostov said there was evidence to suggest that a second spying case ran counter to "Galeria" even though this had not been established for sure. He made this announcement after the Committee he chairs interrogated the former head of the Internal Security Department at DANS, Vladimir Pisanchev. So far the Committee has interrogated six former DANS employees.

Kostov said again that the case "Galeria" involved spying on Bulgarian journalists, holding conversations with them, and "advising" them without direct threats in order to persuade them against publishing certain information.

The Parliamentary Committee on DANS has received a letter from Ognyan Stefanov, the Bulgarian journalist who was severely beaten in September 2008 by four unknown persons. The letter revealed that Stefanov had a meeting with DANS agents Aleksei Petrov and Ivelin Hadzholov. They did not threaten him directly but, Kostov's words, one got the impression that they exerted pressure on Stefanov.

Kostov's Committee is set to interrogate more people from DANS regarding the notorious Galeria case, which the Agency undertook in 2008, after it was set up on January 1, 2008.