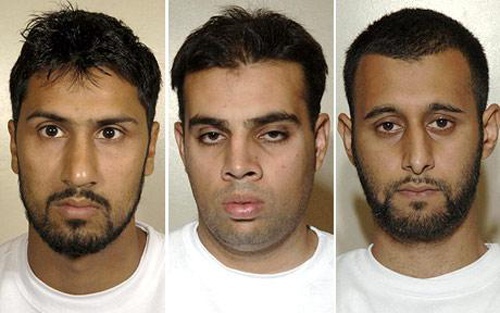 The judge said the men were guilty of "the most grave and wicked conspiracy ever proven within this jurisdiction". Photo by telegraph.co.uk

Three men who plotted to blow up transatlantic flights with liquid bombs have received life sentences, with minimum terms of 32 to 40 years.

Ringleader Abdulla Ahmed Ali, 28, will serve a minimum of 40 years in jail, the BBC reported.

The judge said the men were guilty of "the most grave and wicked conspiracy ever proven within this jurisdiction".

"The intention was to perpetrate a terrorist outrage that would stand alongside the events of September 11, 2001 in history," said Justice Henriques.

"I'm satisfied that there is every likelihood that this plot would have succeeded but for the intervention of the police and the security service."

A fourth man, Umar Islam, 31, convicted of a more general conspiracy to murder charge, has been given a life sentence and will serve a minimum of 22 years in prison.

The men's arrests in 2006 caused chaos to the global aviation industry and prompted continuing restrictions to the amount of liquids passengers can take on to aircraft.

The Director of Public Prosecutions, Keir Starmer, is seeking a retrial of three other men for conspiracy to murder, after the jury failed to reach a verdict on this charge against them.

A legal hearing on 5 October will decide whether Ibrahim Savant, 28, Arafat Khan, 28, and Waheed Zaman, 25, will face another trial.