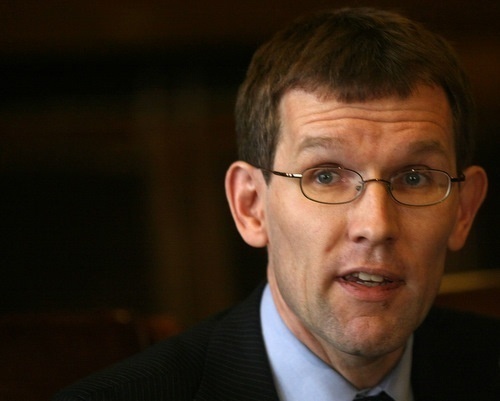 Bas Bakker, head of the global lender mission to Bulgaria. Photo by BGNES

A mission of the International Monetary Fund, headed by Bas Bakker, will pay a visit to Sofia from September 10-21.

The mission has been invited by the new government to help it assess the fiscal situation in 2009 and 2010 and plans to disseminate its main conclusions at the end of its visit.

Representatives of the European Commission are expected to accompany IMF mission.

Bulgaria's budget deficit shrank to BGN 105 M in August, down 81.4 % on the month after the new government cut spending and took measures to raise revenues.

The new center-right government approved at the end of August a mid-term fiscal policy document, which brings together the country's key macroeconomic forecasts for 2010-2013.

The document forecasts the contraction of Bulgaria's economy to slow down to 2% next year from a 6.3% shrinking in 2009.

The GERB party has vowed to cut public spending by an additional BGN 1,156 B and improve tax collection to avoid slumping into a budget deficit at the end of the year.

Bulgaria, like other eastern European countries, has already been hit by the global crisis, but the finance minister says the hardest blow will come in the autumn.

The country's economy may show the first signs of recovery at the beginning of 2010 and is likely to start a rebound in the spring next year, according to Djankov.

Given a healthy recovery of the economy, Djankov said plans for a 2% cut in the Value Added Tax (VAT) may be implemented in 2011, to be followed by another 2% decrease before the term of the government expires.

The government plans to apply in November to join the exchange-rate mechanism, the European Union's two-year currency stability test before the country can drop the lev and adopt the euro, and leave the lev tightly pegged to the euro through the duration of the two years.

According to Djankov devaluing the lev, an option that has been supported by a number of experts, is out of the question.

The International Monetary Fund expects the Bulgarian economy to shrink by 7% in 2009 and another 2,5% the next year, the head of the global lender mission to Bulgaria Bas Bakker told Deutsche Welle at the beginning of July. The forecast beat considerably the figures previously published and came amid new analyzes for the world economy.

The new government had initially given indication that it is likely to turn the IMF for help, something the previous government has resisted and most economists would applaud.

Earlier this week, however, in what comes as a U-turn in their position, Finance Minister Simeon Djankov said securing a loan from the International Monetary Fund, following Latvia, Romania, Hungary and Ukraine among others, to support the currency peg to the euro, is not an immediate priority for the Bulgarian government.