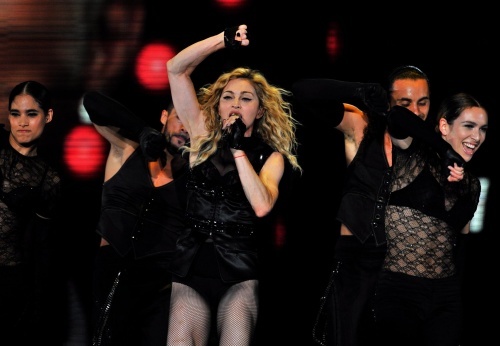 The metropolitan's comments come as the latest controversy to dog Madonna's tour of Europe. Photo by BGNES

From The Telegraph (UK)

A senior figure in the Bulgarian Orthodox Church has suggested that a wrathful God, angry with Bulgarians attending a Madonna concert, may have had a hand in a recent boating tragedy that claimed the lives of 15 of his countrymen.

Nikolay, the metropolitan of Bulgaria's second biggest city, Plovdiv, linked the disaster, which occurred on Lake Ohrid in Macedonia on September 5, to the behaviour of Bulgarians who attended the concert.

"The catastrophe in Macedonia in which 15 Bulgarian citizens died was a sign from heaven," said the metropolitan in a special memorial mass for the victims.

Nikolay stressed that the day of the Madonna concert, August 29, had coincided with a holy day commemorating the beheading of John the Baptist, and therefore was not a day for enjoyment.

"The Orthodox Church had called for people not to enjoy themselves on the day marking the execution of John," he added. "We should not allow the young to have fun on a day that should be dedicated to spiritual reflection."

Bulgaria's clergy had led vocal opposition to the American's singer concert once it became known that she would perform on August 29.

The metropolitan's comments come as the latest controversy to dog Madonna's tour of Europe. She faced similar opposition in Poland from conservative Catholics, opposed to a concert that also happened to fall on a holy day, and in Bucharest she was booed after speaking out on behalf of gipsy rights.

Views on BG » Be a reporter: Write and send your article
Tags: orthodox church, Madonna
Advertisement
Advertisement
Expats.bg All Are Welcome! Join Now!
Related Articles:
More from Views on BG