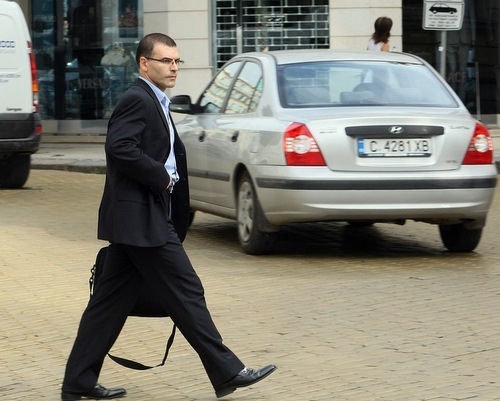 Simeon Djankov will head for Brussels next week. Photo by BGNES

Bulgaria's Finance Minister Simeon Djankov will pay a visit to Brussels a week after the much expected first visit of Prime Minister Boyko Borisov, starting on September 10.

In Brussels, Djankov is expected to present Bulgaria's willingness to apply in November to join the exchange-rate mechanism, the European Union's two-year currency stability test before the country can drop the lev and adopt the euro, the finance minister said.

Joining the exchange-rate mechanism would bring Bulgaria closer to the umbrella of the euro region and the protection of the European Central Bank and is conditional on whether the new government will succeed to restore Brussels trust.

The lev is already linked to the euro in a currency board that keeps the Bulgarian currency at 1.9558 to the euro. Joining the exchange-rate mechanism may allow the lev to fluctuate by as much as 15 percent around a central band, though the central bank has said it will leave the lev tightly pegged to the euro through the duration of the two years.

Meanwhile a group of experts from the International Monetary Fund will start a visit to Bulgaria on September 10 to monitor the execution of the budget for 2009 and the forecasts for the next year.

The center-right GERB party, which won the general elections on July 5, has made a U-turn in its initial plans to turn to the IMF for help, something the previous government has resisted and most economists would applaud.

A final decision is expected to be taken in February, when the budget parameters and the impact of the public spending cuts the party plans to undertake will be clear.