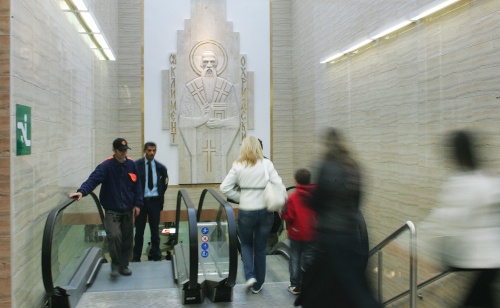 The newest metro station in Sofia at the Sofia University St. Kliment of Ohrid was opened Monday without ceremonies. Photo by BGNES

The first completed line of the Sofia Metro is officially in operation after its last stretch was launched without formal ceremonies Monday. The formal opening will be held on September 8 instead.

The ceremonies had been canceled because of the Mourning Day over the death of 15 Bulgarian tourists in the Ohrid Lake in Macedonia on Saturday, September 5, 2009.

Starting 5 am Monday, the Sofia University St. Kliment of Ohrid metro station is in operation connecting the two already existing parts of the first metro line.

The last part of the Sofia Metro line was funded with USD 104 M by the Japanese Bank for International Cooperation.

The first completed line of the subway is long 18 km and has 14 stations; it connects Sofia's most populous residential quarters - Mladost 1 in the southeast with Lyulin and Obelya in the west - via the city center. The three very downtown stations are located at the Vasil Levski Stadium, the Sofia University main building, and the government and presidency buildings (Serdika Metro Station).

A second metro line is under construction, and a third one has also been planned.