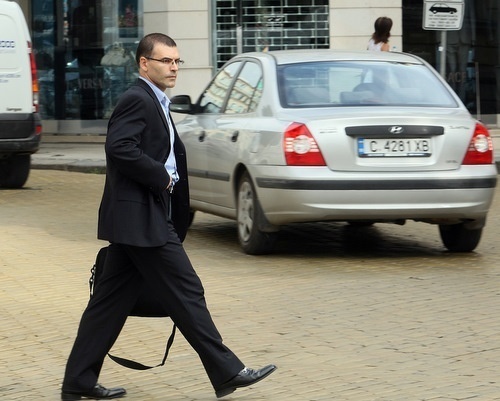 Bulgaria's new government has slashed spending and seen its approval ratings rise, making a political star out of Simeon Djankov, a former World Bank economist who runs the finance ministry.

The government, led by Prime Minister Boyko Borisov, swept parliamentary elections early in July on a promise to ease the recession and bear down on levels of corruption that prompted the European Union to freeze .56 billion in aid funding.

That lack of funds aggravated the economic pain for the EU's newest and poorest member, where real-estate and steel-industry booms propelled by a wave of foreign capital have been replaced by shuttered factories, sending budget deficits higher.

Mr. Djankov has frozen government wages and pensions, mothballed costly state investment projects, and slashed government spending by 15%. The result is an 81% reduction in Bulgaria's budget deficit to .5 million in August from 2 million in July.

Amid those measures, the government has earned accolades from Western economists and drawn the highest approval ratings at home since the fall of communism two decades ago. Recent Gallup polls put the government's approval at 64%.

Ivo Prokopiev, chairman of industry group the Confederation of Bulgarian Employers and Industrialists, said, "The crisis has given the new government a unique mandate -- every single unpopular decision could be explained -- and the public are more likely to support the policy."

For many voters, Mr. Djankov has become closely associated with those decisions and their execution.
Bulgaria's economy thus far has avoided the double-digit contractions seen in Latvia, Lithuania and Estonia, but unemployment is rising and forecast to surge this year. At the same time, the country's appeal as a low-cost labor base is waning, potentially hampering an export-led recovery.

"We still need to do significant work in terms of cutting expenditure," Mr. Djankov said. "But I am fairly confident we will have a balanced budget this year."
The Bulgarian economy should bottom out by year's end, Mr. Djankov said, if global demand rises. Preliminary figures show gross domestic product contracting 4.8% in the second quarter, after growing 7% during the same period last year.

The finance minister emphasized that he is in no rush to tap the International Monetary Fund for emergency financing, as many of Bulgaria's neighbors have. An IMF delegation arrives in Sofia, the Bulgarian capital, this week to assess the fiscal situation. "We will have clearer signals on whether we will need IMF financing by the end of the year," he said.

A Bulgaria native, the 39-year-old Mr. Djankov returned from Washington to join Mr. Borisov's government. He spent 14 years at the World Bank, most recently as chief economist for finance and the private sector.

Mr. Djankov's first task in office was undoing a spate of populist spending by the previous Socialist government before the July elections, which threatened to put Bulgarian public finances into the red for the first time in years. The downturn exacerbated the pressure, cutting tax receipts by more than a tenth as domestic demand plummeted.

"Just a few months ago Bulgaria was a problem child... It was one of the region's worst offenders but it seems to have turned around and given everyone a lesson," said Nigel Rendell, emerging markets analyst at RCM Capital Markets.

Mr. Djankov said his priority is keeping the budget from falling to the level of deficit that could jeopardize the peg between Bulgaria's currency, the lev, and the euro. Maintaining the peg is essential for Bulgaria to enter into the European Union's Exchange Rate Mechanism, a waiting room for full adoption of the euro as the national currency. Other countries in the ERM include the Baltic states and Denmark.

The Balkan country shares many problems afflicting Hungary and Latvia, particularly a large amount of foreign-currency debt. Bulgaria relied on foreign funding for a quarter of its gross domestic product last year. That also is changing. Bulgaria's external deficit is likely to narrow to around 15% of GDP from last year's 25%, as imports fall faster than exports, according to some estimates.

"Bulgaria still faces plenty of challenges. The economy still has a problem with an overhang of external debt and if the recovery stagnates then I think it will be hit hard," said Neil Shearing, an economist at London-based Capital Economics.

Mr. Djankov said the perceived positive effect of the reforms combined with public support would make it easier for policymakers to take the tough steps necessary to ride out the recession.

"The election clearly showed that people are fed up with corruption and bad governance, but once good things start happening then you get some positive spillover -- and we're determined to make the most of that," he said.