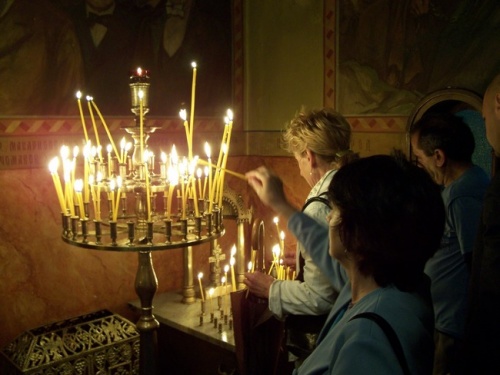 Over 200 people gathered Sunday morning at the Plovdiv Cathedral to attend the service for the victims of the Ohrid tragedy. Photo by DarikNews

The Plovdiv Metropolitan, Nikolay, served Sunday a mass for the 15 Bulgarians, who drowned Saturday in Lake Ohrid in Macedonia.

The 15 were on the tour boat "Ilinden" in their way to the St. Naum monastery, when it went underwater. All passengers on the ship were Bulgarians, 40 survived the accident.

The Council of Ministers declared Monday, September 7, a National Day of Mourning and canceled all Sunday events dedicated to the 124th anniversary of the unification of the Principality of Bulgaria and Eastern Roumelia. The official celebration is traditionally held in the city of Plovdiv because the unification was declared there in 1885.

The only events that took place all over Bulgaria Sunday were the services for those who died in Lake Ohrid the previous day.

Over 200 people gathered Sunday morning at the Plovdiv Cathedral. According to its sexton, the cathedral had never before seen such day of mourning. Bulgaria's President Georgi Parvanov, and the Speaker of the Parliament, Tsetska Tsacheva, attended the memorial service for the victims.

During the mass, the Plovdiv Metropolitan, Nikolay, hinted that God had punished Bulgarians over their many sins including celebrating and partying too much on August 29 (the day of the concert of pop diva Madonna in Sofia) instead of mourning for St. John the Baptist.

The Eastern Orthodox believe that John was the last of the Old Testament prophets, thus serving as a bridge between that period of revelation and the New Covenant. They also teach that, following his death, John descended into Hades and there once more preached that Jesus the Messiah was coming, so he was the Forerunner of Christ in death as he had been in life.

In the Eastern Orthodox tradition, August 29 is the day of the beheading of St. John the Forerunner.

A solemn laying of the wreath at the "Unification Monument" with military honors, but without fireworks, will still be held in Plovdiv Sunday evening. Tsetska Tsacheva and the Plovdiv Mayor, Slavcho Atanasov, will attend the ceremony.