Bulgaria Air Force 1 Ready to Fly Back to Macedonia 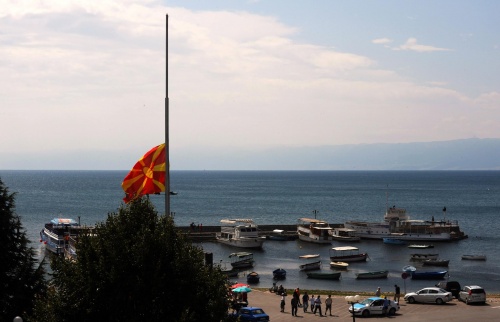 Macedonian flag flies on half-must in front of the Ohrid harbor Sunday, after 15 Bulgarians drowned in the lake Saturday when a boat sunk in the waters. Photo by BGNES

Bulgaria's Prime Minister, Boyko Borisov, had ordered full preparedness of the government TU-154 aircraft to fly to Skopje, if needed.

The plane will be used to transport relatives of the victims of the tragic Saturday incident in Macedonia, in which 15 Bulgarian tourists drowned after the tour boat "Ilinden" sunk in the waters of the Ohrid Lake.

Late Saturday night, the government plane brough back to Bulgaria 38 of the 40 survivors. (The bus driver and the tour guide remained in Ohrid.)

The plane is made available once again in order to assist the quick identification of the bodies by the families.

The relatives can make requests for travel to Skopje through the 948 30 03 hotline at the special Crisis Headquarters.

The bodies of the victims were transported Saturday night to the capital Skopje for autopsy. Bulgarian coroners are assisting their Macedonian colleagues. Latest reports say the autopsies had already begun.

The relatives of the victims must travel to Macedonia to identify them. Only then can the bodies be transported to Bulgaria, per the Macedonian legislation, despite the fact that all 15 fatalities have already been identified.