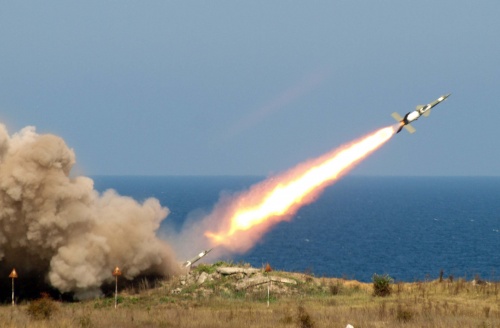 A missile engine exploded a second after the launch of an anti-aircraft rocket during drills near Shabla. Photo by BGNES

An anti-aircraft missile exploded shortly after its launch during military drills of the Bulgarian Army near the northeast town of Shabla.

The rocket exploded 50 meters up in the air a second after the launch in front of the eyes of Defense Minister, Nikolay Mladenov, and President Georgi Parvanov, who is the Bulgarian Commander-in-Chief.

No one was killed or injured by the explosion but the drills had to be terminated for some time. The explosion originated in the engine of the anti-aircraft missile, whereas its head fell in the sea, and will be recovered by divers.

"Unfortunately, this incident shows that we are working with outdated equipment. The conclusions is that we need to restore the priorities of our armed forces," Defense Minister Mladenov commented after the explosion.