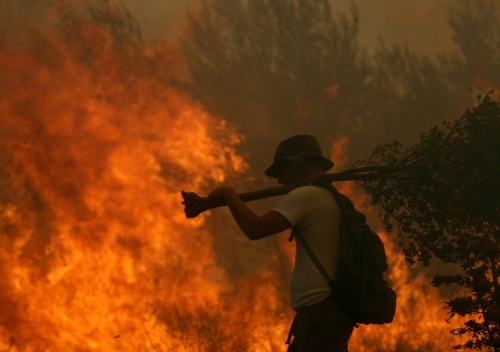 The fires do not pose a threat to either the Sveti Vlas or the Sunny Beach resorts. Photo by BGNES

Three wildfires are burning in the coniferous forests near the Bulgarian Black Sea resort of Sveti Vlas, the local mayor reported Friday.

Ivan Nikolov, the Sveti Vlas mayor, reported that 5 fire engines, 2 from Nesebar and 3 from Burgas, along with over 100 volunteers are currently trying to contain the fires.

He added that the fires do not pose a threat to either the Sveti Vlas or the Sunny Beach resorts.

The size of the fires has not yet been confirmed but local reports suggest an area of up to 500 decares has gone up in smoke.

On August 26 a large wildfire encompassed about 300 decares of coniferous forest right above Sveti Vlas.