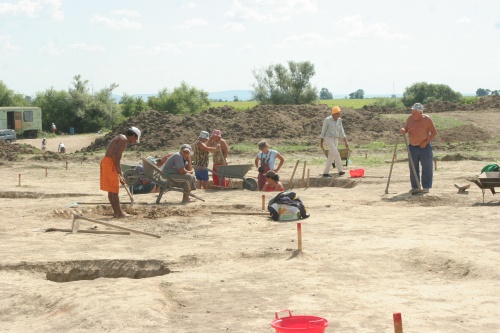 Bulgarian archaeologists are concerned the proposed legislation changes will not protect the country's cultural heritage. Photo by BGNES

Leading Bulgarian archaeologists have declared themselves against amendments of the Cultural Heritage Act proposed recently by the ruling GERB party.

The changes provide for more lenient requirements for the registration of antiques and archaeological items modifying the law that is supposed to protect Bulgaria's cultural heritage from the treasure hunting plague and organized crime groups dealing with antiques trafficking. The amendments in question were proposed by two Members of Parliament from the ruling GERB party, Daniela Petrova and Pavel Dimitrov.

"By rescinding the requirement to have an official document proving the origin of cultural items, their ownership will now be certified with random pieces of paperwork. This is disrespect," said Margarita Vaklinova, Director of the Bulgarian Archaeological Institute and Museum at the Bulgarian Academy of Sciences, during a special press conference Thursday.

"There are very strong lobbies who are behind the draft amendments. The problem is that some groups of people believe that their property is untouchable and try to make that stick in every way possible," said Prof. Totko Stoyanov, archaeologist at Sofia University St. Kliment of Ohrid, who is also the head of the Bulgarian Archaeologists' Association.

The archaeologists also slammed the fact that the Bulgarian Ombudsman, Ginyo Ganev, has disputed some of the provisions of the Cultural Heritage Act referring to property rights as unconstitutional before the Constitutional Court.

In their words, if the dispute succeeds, the Bulgarian state will lose the control over its cultural heritage.

Vaklinova said the archaeologists did not know which specialists participated in the commission appointed by Culture Minister, Vezhdi Rashidov, to draft the changes in the Cultural Heritage Act.

The archaeologists are also worried by the fact that the amendments propose that all powers of the National Institute for Cultural Monuments be transferred to the Minister of Culture. This would amount to the actual shutting down of the Institute, while the draft changes do not state which institution in the Ministry will take over its rights and responsibilities.