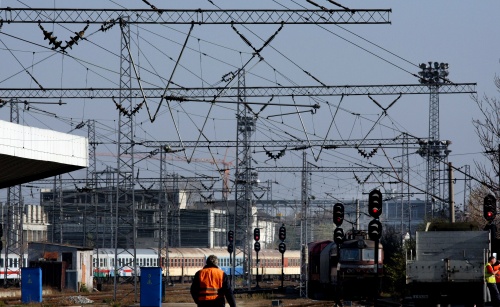 Some 4 000 railroad workers might be laid off in Bulgaria in the coming months. Photo by BGNES

Bulgaria's state-owned railway company BDZ intends to lay off a total of about 2 000 workers in order to make ends meet by the end of 2009.

The company has a deficit of BGN 22 M in 2009 so far. On Wednesday, its management met with the two trade unions "Podkrepa", and the Confederation of Independent Bulgarian Syndicates.

BDZ and its three subsidiaries dealing with freight, passenger transport, and locomotives, are planning to lay off 1 330 workers starting October 1, 2009. Another 670 will be made redundant on December 12, 2009. Since the beginning of 2009, BDZ has dismissed 1 117 workers, most of whom are already pensioners and agreed to be laid off.

BDZ's other anti-crisis measures include reorganizing the work in order to reduce spending for fuel, electricity, and maintenance. The state company expects to save BGN 24,5 M through these measures and the layoffs.

The company has also announced that because of its harsh financial condition, there may be delays in the payment of salaries in the coming months. No salary cuts are envisaged.

Several days ago, Bulgaria's other state-owned railway company, National Company "Railroad Infrastructure", said it would retain 30% of its workers' monthly salaries by the end of 2009, and would then pay them with interest after January. It has also been considering plans to lay off about 2 000 workers. Thus, a total of 4 000 Bulgarian railroad employees might be laid off in the months to come.